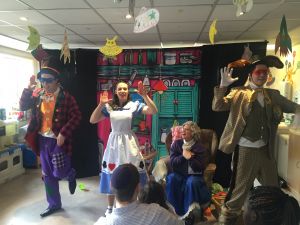 The charity Starlight came to Galaxy ward at Barnet Hospital yesterday, to perform an interactive pantomime for children.

As part of the Starlight Storytellers Tour, The Panto Company performed Alice in Wonderland, Little Red Riding Hood and Pinocchio for children and staff on the ward.

The delighted group of children gathered with parents and staff members in the playroom to watch the performance, giggling, clapping and intermittently shouting “he’s behind you” to accompany the action on stage. 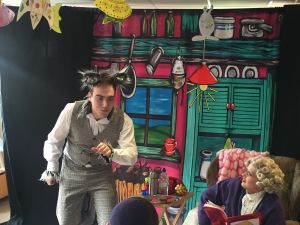 The show’s brightly coloured set and fabulous costumes brought a huge helping of fun to the ward.

Marion Michel, play specialist on Galaxy Ward, said: “It was wonderful to have Starlight here to perform their show. It provided a much needed break for children on the ward; the kids all loved it and the staff did too! We even had one parent who was crying with laughter!”

The eight-week long Starlight Storytellers Tour will visit 92 children’s wards across the country.

Starlight Children’s Foundation is a national charity that grants wishes for seriously and terminally ill children and provides entertainment in hospitals and hospices across the UK. For more information on Starlight, visit www.starlight.org.uk.