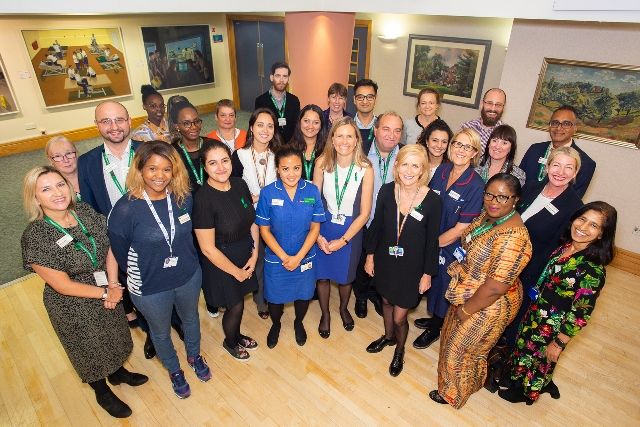 Staff welcomed the National Freedom to Speak Up Guardian for the NHS, Dr Henrietta Hughes, to the Royal Free London yesterday.

Dr Hughes, who combines her role as National Guardian for the NHS, with being a GP in Camden, welcomed Freedom to Speak Up champions from across the trust and Guardians from trusts across London to the event being held as part of national speaking up month.

Dr Hughes said she was delighted to have the opportunity to speak at the Royal Free Hospital. She said: “My grandmother was a pioneering medical student here, I’ve been a patient here and I’ve also been a parent to a patient at the trust. I’m a local GP as well. I’m delighted to be here at the Hampstead site today. I know staff have come from across the trust and I’ve also visited Barnet Hospital and Chase Farm Hospital previously . I want staff across the trust to know they are equally supported.”

Dr Hughes, who shared her insights with staff from the three years to date she had been in post said it was important to recognise that speaking up was only effective if listening occurred. She advised: “Speaking up is only half of the bargain.”

Dr Hughes’ role was a key recommendation from Sir Robert Francis’ Freedom to Speak Up Review in response to the failings in Mid-Staffordshire.

She spoke about how staff who had highlighted the widespread failure of care of patients at Mid Staffordshire Hospital had been bullied, victimised and even physically threatened, but also pointed out that this was not an isolated incident in the NHS. She said when things went wrong there was a ‘normalisation’ of unacceptable behaviour and she urged managers and leaders to take steps – literally - to avoid this in their own spheres.

She said: “Wear flat shoes and get out there! Go out on safari… see how other teams do things well, see what can be shared and bring it back to your own team.” 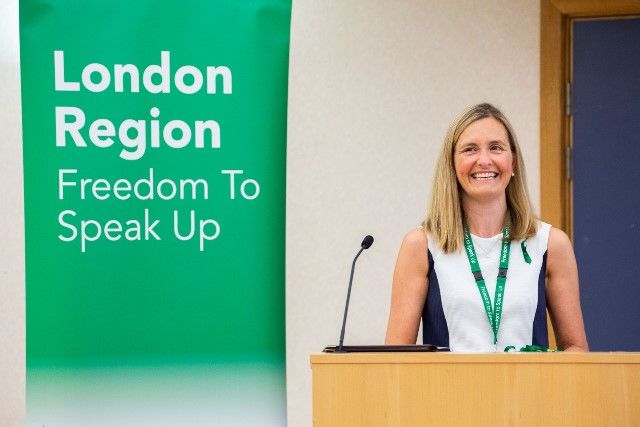 Dr Hughes said the same topics came up time and again in the NHS, but also in other organisations, including bullying, conflicts of interest, inequality, a focus on targets over patient care, competition between teams and trusts, workarounds, entrenched views and rivalry.

She said: “We need to get down and fix the root causes of things. There needs to be a culture where information is seen as a gift and people are thanked for raising issues. We need to learn from each other and make speaking up just business as usual.

“I’d like to encourage managers to invite a speaking up champion to your team meeting. What we want is a culture where anybody can speak to anybody and be happy to do so.”

Dr Hughes acknowledged that in a pressured job it might not always be easy to maintain accessibility to team members but she issued a challenge.

“If someone new joined your team do you feel like they could bring something to you on their very first day if they thought something had been handled wrongly? That’s the kind of working environment you need to aim for.”

She added: “If there’s anything you want to speak about that for whatever reason you can’t talk about with your manager then you can approach a Freedom To Speak Up Champion in your workplace. They can give you feedback and support throughout the process.”

The Royal Free London has Jim Mansfield, staff side chair, as the FTSU guardian and he is supported by Natalie Ware, head of workforce, and they work alongside our team of champions. Currently the trust has 60 champions but this number is ever increasing as more staff volunteer to be part of the speaking up agenda. The positive work happening around speaking up was recently recognised at the annual staff awards with the champions receiving a highly commended Oscar.

Staff can approach any of the champions at any site to raise concerns such as unsafe patient care, poor working conditions, fraud, inadequate induction or poor recruitment practices.