Staff from the Royal Free Hospital will feature in the new Jamie Oliver documentary to be broadcast on Channel 4 on Thursday.

Jamie's Sugar Rush will examine the impact of eating too much sugar. 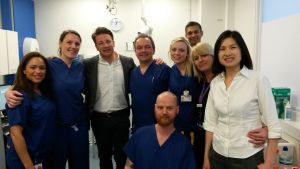 The TV chef came to the Royal Free Hospital in April to speak to staff and patients affected by type 2 diabetes.

Patients who live with diabetes for some time can develop foot conditions and some may require part of their foot or all of their foot to be amputated. These patients are cared for by the podiatry team, led by head of podiatry Richard Leigh, who was interviewed by Jamie.

Jamie's Sugar Rush will be broadcast on Thursday 3 September at 9pm on Channel 4.