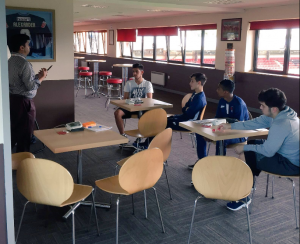 On Tuesday 13 September biochemists from the RFL held a series of workshops at Leyton Orient for their BTEC sports students aimed at raising awareness of FH. The doctors gave advice on FH, cholesterol and heart attacks, how your diet can affect cholesterol and how to test for cholesterol if you have a positive family history of premature CVD.

FH is an inherited form of high cholesterol. It is caused by a defect in a gene which controls the way cholesterol is managed in the body. There are thought to be 120,000 people in the UK with FH, however only 20,000 cases have been diagnosed, pointing to at least 100,000 cases of undiagnosed FH in the UK.

Dr Devaki Nair, consultant and honorary senior lecturer in clinical biochemistry at the RFL, said: “We wanted to do this as our two clinical nurse specialists took part in a project which was funded by the British Heart Foundation, where we went through 49,979 primary medical records from north and east London.

“They found that 6,524 had a cholesterol measurement, and 69 of these people met the criteria for a diagnosis of FH and were offered genetic testing. Of this group, 22 tested with a positive mutation, two results have not come back and 45 were negative. From the 22 who tested positive, there are 73 potential relatives who could now have an earlier diagnosis of FH.

“Of the test group 40% were aged 18-40, and of this group 80% had never had a cholesterol test before. In the NHS, cholesterol tests are only offered to those over the age of 40. It was great to work with students at Leyton Orient, as we were presented with the opportunity to identify FH in younger people who are currently missing out. Testing at this age group could save the NHS a lot of money as detecting FH earlier makes it easier to prevent heart attacks.”