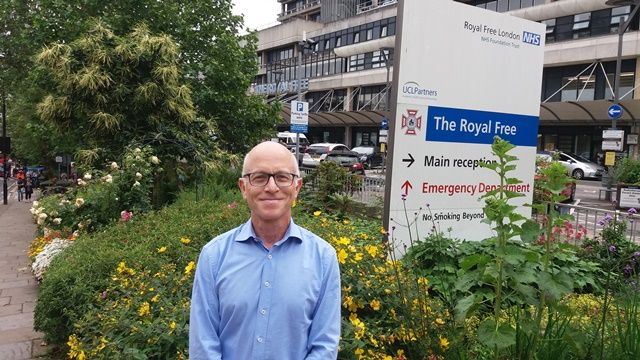 Later this week (July 3) Dr Mark Berelowitz, director of the Child and Adolescent Mental Health Service (CAMHS) at the Royal Free Hospital will be speaking with Dr Teerakiat Jareonsettasin at the 2019 International Congress of the Royal College of Psychiatrists.

Their joint talk will be about the resilience and well-being lessons we can all learn from the grit and determination displayed by the 12 boys aged 11 to 16 and their 25-year-old football coach, who successfully rescued from the Tham Luang Nang Non cave a year ago, after spending more than a week trapped underground. Find out more about the connection between the Royal Free Hospital and the boys in the cave by reading the full story here.

Ahead of the conference here are some of Dr Berelowitz's well-being tips:

Never abandon hope
Express your hope by carrying on living in the moment. The boys kept themselves hydrated, they meditated, they planned an escape. It’s not about waiting to be rescued – you have to help yourself and that’s just as valid whatever your current situation.

Be mindful and live in the present
Look after yourself and the people around you – this is so important for your mood. Whatever happens it is vital that life carries on. In World War II many British soldiers were in prisoner of war camps for years on end and key to their survival was continuing to try and maintain their dignity – whether that was through looking after their clothing or joining a club.

Look after the most vulnerable
The Thai boys’ story wasn’t about the survival of the fittest. The Western philosopher John Rawls says that the measure of the goodness of any intervention is whether it benefits and safeguards the most disadvantaged members of society. The boys started as a team when they went in the cave but they became a society. The rescuers didn’t give up and the boys took care of themselves. There was an absolute unity and common purpose.

Put aside self-interest
Consider a problem using ‘the blindfold test’.  Try and put yourself in someone else’s shoes and put aside your interests. What you want to work towards is trying to find the best outcome for everyone in the room.  I’m wary of ‘bumper sticker’ platitudes  … ‘All for one and one for all’ but for the Thai boys it was unthinkable that something like physical strength or financial advantage would have interfered with the process. Put simply if you were going to cut a cake six ways and you didn’t know which piece you were going to get how would you cut it - equally of course.

Put blame aside
It was important for the boys’ healing process that no-one was seeking punishment. The focus was on the positives rather than the negatives. The boys have been free to continue their relationship with their coach for whom they have more respect than ever.

Cherish what you have
If things are going well for you and you don’t feel you need to learn any wellbeing lessons then I would say that’s great but equally you should cherish what you have. When things are going well that’s when you should be working hard building community … because you never know when you are going to need it. How lucky were the boys that there was already an international network of cave diving experts who turned rescuers. That didn’t happen by accident.

Trust
In the instance of the Thai boys everyone had faith in the system and it paid off. It’s really important that society has faith in its institutions and that we can also count on each other. It is hard to know how the boys would have behaved if they had been total strangers – probably not as well. But in an ideal world we should be able to place our trust in each other – this is what gives us strength.