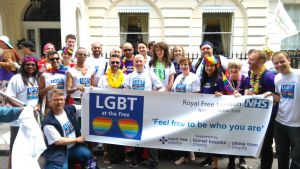 Staff and friends from the Royal Free London’s lesbian, gay, bisexual and transgender (LGBT) forum took to the streets of London on Saturday 25 June as part of the Pride in London Parade.

Pride is the city’s biggest one-day event and was once again attended by more than one million people. It is one of the world’s biggest LGBT celebrations which this year also had events to commemorate those who lost their lives in the Orlando massacre.

Staff from the trust took part in the annual parade led by Stephen Downer and David Rushton, RFL LGBT forum co-chairs. David said: “The atmosphere in central London was electric with a real sense of coming together in celebration of diversity. The reaction from the crowds was fantastic with many people chanting in support of the NHS as we passed by.

“After the shocking scenes of violence and hatred inflicted on the LGBT+ community in Orlando, the size of the crowds filling the streets was genuinely moving and affirming. A huge thank you to all of the staff and friends who came along. I think I can say for everyone that we had an amazing day!”

Stephen said: “London Pride was fantastic this year with 27 staff and friends taking part in representing our trust with specially made t-shirts and a banner.”

If you would like to know more about the RFL LGBT group please email rf.lgbt@nhs.net.