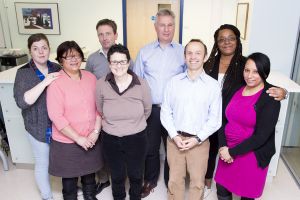 To coincide with World TB day we reveal one patient’s experience of being diagnosed and treated at the Royal Free Hospital.

An got a cough in October and at first thought she just had a normal chest infection.

“I didn’t pay attention to it, I put it down to stress,” said An. “Then I started having chest pain and went to the doctor. He listened to my chest and said it was clear. However, he ordered an x-ray. Then because I moved house I didn’t get the letter asking me to come in.

“Then in January I developed a fever. It lasted for three days. As soon as I called 111 they sent an ambulance to pick me up and they took me to the Royal Free Hospital – I think they saved my life.

“The nurses and doctors looking after me here were very compassionate, that made such a difference to me. The doctor who treated me said he thought I had tuberculosis (TB) and they confirmed it with a test. After taking antibiotics, the fever died down – that was such a relief to me.

“When they told me I had TB I was shocked. I didn’t think anyone could get TB in this day and age,” said An.

An said there is a stigma attached to TB. “When I told people I had TB they did not want to shake my hand and I was asked to leave the house where I was renting. It has been hard – people are scared of it.”

Although An is still receiving treatment, she is no longer contagious and is on the road to recovery. She is back to her old self and is even planning to start her own business.

“I was so happy to be discharged from hospital – I felt very emotional because I had my life back!”

In recent years the number of patients in London diagnosed with TB has risen, with almost 3,000 new cases in the capital each year.

The Royal Free London is the lead TB provider for the north central London sector. With clinics at Edgware Community Hospital and the Royal Free Hospital, we offer a range of services including a clinic dedicated to treating people who have HIV and TB, support and care for patients with drug resistant TB, social care support and advice and the latest diagnostics and research.

Find out more about our tuberculosis service, including contact details and information about the team.

Image: The tuberculosis team at the Royal Free London.

Note: To protect the patient’s identity we have used a pseudonym.