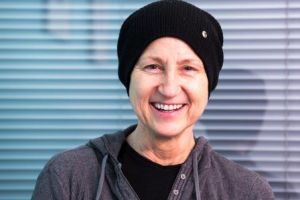 Television presenter Carol McGiffin has thanked staff at the Royal Free Hospital, where she has recently been treated for breast cancer.

The former Loose Women presenter said she couldn’t thank staff enough for the care she received at the hospital, which she said was “second to none.”

She said: “I want the staff to know how grateful I am for everything they did. When you are being treated in hospital you develop a fondness for the people who are looking after you. You develop a relationship with them and when you leave, just saying thank you doesn’t feel enough.

“You get very attached to the staff – I was on first-name terms with all of them. They were magnificent and when it is all over you feel as if you shouldn’t just walk away.”

Carol was diagnosed with breast cancer a year ago and, following a mastectomy, was treated with chemotherapy and radiotherapy at the Royal Free Hospital.

She said that some parts of her treatment were tough, but that the caring staff helped her through.

"Particularly in the breast clinic, which is your first point of contact and the source of the original diagnosis so it can be scary, they are so good at putting you at ease,” she said. “Nothing is a drama, they are very matter of fact, which is what you need. You need to be told the truth, and they always explained things very well to me so that I understood everything, they were brilliant.”

Carol said she had to get used to being a patient and being looked after. “I am very independent,” she said. “Like most other people, I hate being ill but you have to give into it and accept whatever the doctors and nurses are saying to you.”

After revealing she had been battling breast cancer, Carol said she had received thousands of messages of support from well-wishers, which she found “overwhelming”.

“It was lovely to receive all those messages – I never knew there were so many kind people out there, it was really touching,” she said.

And now after a year of treatment Carol is looking forwarding to having a normal life again and doing some of the things she put on hold when she was diagnosed.

“Compared with this time last year, things are so different,” she added. “I feel very relieved and I am looking forward to going on holiday!”