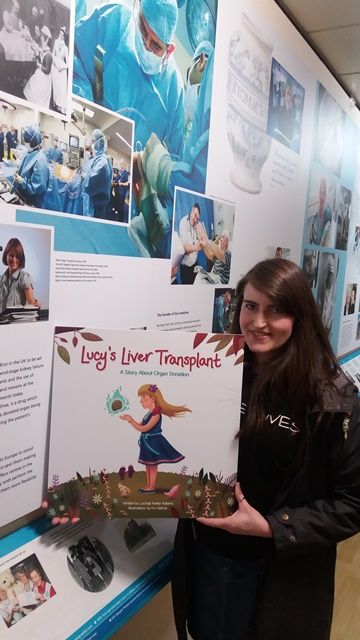 For Lucinda Parker Roberts it still feels nothing short of miraculous that she is able to play with her new black Labrador puppy, Bella, and not be forced to lie on a sofa feeling completely exhausted.

The 33-year-old had a liver transplant at the Royal Free Hospital back in August 2017 and admits that life has changed significantly for the better in the past 15 months.

But she is determined not to forget those who are still waiting for a life-saving transplant and her experiences have led her to write a book aimed at children called, ‘Lucy’s Liver Transplant’, in which Lucy actually ‘meets’ her poorly liver and other organs as well!

Lucinda, who lives in Surrey with her parents, admits she feels ‘a completely different person’ since the transplant.

Diagnosed at 17, with an auto immune condition, Lucinda says that as she got older her health deteriorated to the point she spent most of her days on a sofa, and eventually she was put on to the liver transplant waiting list.

It was in the middle of the night last year that she received a call on her mobile from a liver transplant co-ordinator at the Royal Free Hospital who told her that she should come to the hospital straight away. A nine hour operation followed and then Lucinda spent nearly two weeks at the hospital recovering.

Lucinda said: “My lucky number is 13 and I was in bed 13 for 13 days before I went home. The staff were incredible, from the doctors and nurses to the cleaners and massage therapists, everyone played their part in getting me back on my feet. The idea of a book came to me while I was on the waiting list because I couldn’t ever remember transplants ever being spoken about at school.

“I think children are really receptive and I hope that my story will help children understand a bit more what it’s all about but in a way that reassures, not frightens them. Hopefully the book will lead to further discussion and conversation in families.

“I know that it isn’t a happy ending for everyone. My new liver was donated as a result of the death of a woman who was only in her 20s. I have written to the family but am not sure ‘thank-you’ can ever match this ultimate gift."

The illustrations in Lucinda’s book were done by an illustrator who lives in Colombia but author and artist have not met … yet.

Lucinda explains: “I put the call out for anyone who would be interested in the project and got so many wonderful responses but Helmut’s work really stood out for me. I love the pictures. Not that long ago I could never have dreamed of feeling this well but now I’m hoping that one day I can go and visit him. I’m looking forward to having some adventures!”

The book is currently available in Kindle format here but Lucinda is aiming for any revenue to go towards printing costs so the book can be distributed to schools in the UK.