The team of Royal Free London radiologists and respiratory consultants who pioneered a faster, more efficient lung biopsy method has been named ‘Cancer Care Team of the Year’ by the British Medical Journal (BMJ). 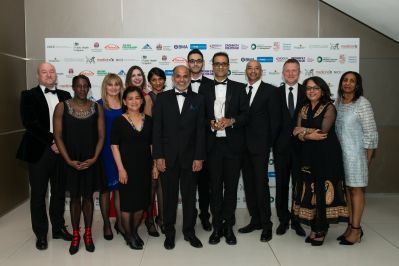 Judges were unanimous in their decision to hand Barnet Hospital’s ambulatory lung biopsy team the award, which was sponsored by the charity Macmillan Cancer Support, at an awards ceremony held at Park Plaza Hotel, Westminster, last night.

Their innovative ambulatory lung biopsy service enables the vast majority of Royal Free London patients to be discharged just 30 minutes after their biopsy. The method also allows biopsy patients who suffer a collapsed lung to be treated at home as out-patients.

However, the relatively small number of Barnet Hospital patients that experience pneumothorax are treated with a small, compact device called the Heimlich valve chest drain (HVCD), instead of a traditional bulky chest drain. While the existing system would see those patients admitted for up to two days, the portable device allows them to leave hospital almost immediately and treat their collapsed lung themselves, safely and effectively at home.

While most hospitals of equivalent size expect to do around 40 biopsies each year, thanks to the new method Barnet Hospital performed around 300 between April 2015 and April 2016.

In January the team, which is led by Dr Sam Hare, consultant thoracic radiologist, won the NHS Innovation Challenge Prize in the ‘cancer care’ category. It is using the £100,000 prize money to set up a national education course that will train clinicians from other hospitals around the UK to use the new method.

Dr Hare said: “It’s fantastic for patients that our lung biopsy method has been recognised by the BMJ. Our technique empowers patients with an early, definitive diagnosis meaning that they can access the latest lung cancer treatments more rapidly, increasing their chance of being cured. Lung cancer kills more people than breast, prostate and colon cancer combined, but with our method we hope to address that imbalance through earlier diagnosis."

Kay Greveson, clinical nurse specialist for IBD, was given a special mention at the same awards after being nominated in the gastroenterology category for creating IBDpassport.com, a travel-advice website for patients with inflammatory bowel disease.