The lung cancer team at Royal Free London has been nominated for an award by the Health Service Journal after developing a new lung biopsy method. 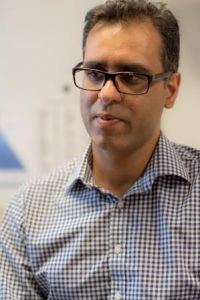 The new ambulatory lung biopsy service, based at Barnet Hospital, enables the vast majority of patients to be discharged just 30 minutes after their biopsy. The method also allows biopsy patients who suffer a collapsed lung to be treated at home as out-patients.

The biopsy team, led by Dr Sam Hare, consultant radiologist and lead for chest imaging, was nominated for the acute sector innovation award and will compete with eight other trusts. Dr Hare is required to complete a presentation and interview about the biopsy method to a judging panel made up of senior figures from the health sector. The winners of each award will be announced on 23 November.

However, the relatively small number of Royal Free London patients who experience pneumothorax are treated with a small, compact device called the Heimlich valve chest drain (HVCD), instead of a traditional bulky chest drain. While the existing system would see those patients admitted for up to two days, the portable device allows them to leave hospital almost immediately while treating their collapsed lung safely and effectively at home.

Dr Hare said: "We’re delighted to have been nominated for the HSJ innovation award. We believe this new method of delivering a lung biopsy is hugely beneficial to patients and is less expensive for hospital. The next step is ensuring that this becomes the norm across the NHS."