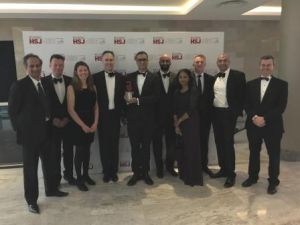 The biopsy team, led by Dr Sam Hare, consultant radiologist and lead for chest imaging, won the acute sector innovation award, ahead of eight other nominees.

They were recognised for developing the new ambulatory lung biopsy service, based at Barnet Hospital, which enables the vast majority of patients to be discharged just 30 minutes after their biopsy. The method also allows biopsy patients who suffer a collapsed lung to be treated at home as out-patients.

The team were given the award at a ceremony held at the O2 InterContinental London Hotel last night.

However, the relatively small number of Royal Free London patients who experience pneumothorax are treated with a small, compact device called the Heimlich valve chest drain (HVCD), instead of a traditional bulky chest drain. While the existing system would see those patients admitted for up to two days, the portable device allows them to leave hospital almost immediately while treating their collapsed lung safely and effectively at home.

Dr Hare said: "We're thrilled to have won this innovation award. It was a great evening and we are pleased that the hard work of the whole team has been recognised.

"We believe this new lung biopsy technique is hugely beneficial to patients and is less expensive for hospitals - but crucially can provide earlier lung cancer diagnosis. The next step is ensuring that this becomes the norm across the NHS."

Image: The lung biopsy team with the award