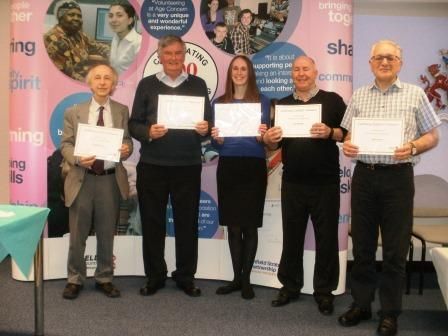 A team of volunteers from Radio Enfield had earned the title of ‘Enfield Heroes’ for their commitment to their community.

The hospital radio team were part of 200 volunteers who were recognised at an awards ceremony at Enfield Civic Centre last month for volunteering for 100 hours or more throughout the year.

Set up in a store room at Chase Farm Hospital in 1970 Radio Enfield was inspired by offshore radio stations such as Radio Caroline. Now nearly 50 years on it’s still going strong and run entirely by volunteers broadcasting to patients at Chase Farm and North Middlesex Hospitals in Enfield and also at the Royal Free Hospital in Hampstead. 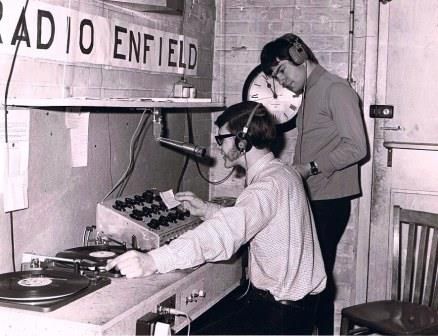 Some of the original pioneers of the hospital broadcasting service are still on hand to play the music that patients and staff request. Radio Enfield's treasurer Howard White and chairman David Scarff will complete 47 years of volunteering this year and station manager Andy Higgins is heading towards his 38th year. They, and their colleagues Clare Scarff, Joe Forster, Jeff Lincoln and Tom Delaney have all participated in Enfield’s 100 hours volunteering programme.

The team are full of energy and enthusiasm. “It’s local, it’s personal and it’s relevant to Enfield,” says Howard, highlighting the importance of the service.

There’s also great pride in the request service for patients, their family, friends and hospital staff. Volunteers visit the hospital wards and write down requests, sending them back to the station in time for scheduling.  You can also submit a request online via the Radio Enfield website.

“You know your request is going to be played. We guarantee to play every request we collect,” Howard adds. This means the variety of music on offer is extremely broad – from classical, to easy listening, to 21st century pop.

Inevitably, the song requests form a key part of the service. David says there are some tunes that regularly make the playlists – Frank Sinatra’s “My Way”, released in 1969, never seems to go out of fashion and David admits Rod Stewart’s “The First Cut is the Deepest” is a favourite of the surgeons.

Clare, the membership secretary, is the first point of contact for those looking to volunteer for the radio service. “You get to listen to a lot of music, all types of music, and you know you are doing something for those less fortunate,” she says.

Clare, whose parents met at Radio Enfield, says her main drive now is to get more people collecting song requests from hospitals. Volunteers at the radio station must be over the age of 18 but there’s no upper age limit and volunteering is open to all willing to commit just one or two hours a week.

As a registered charity, Radio Enfield relies on donations and participates in a lot of charity fundraising. But most importantly, it requires volunteers who enable it to flourish.

Enfield Council’s Cabinet Member for Community Arts and Culture, Cllr Yasemin Brett, said: “We are truly grateful for the commitment, dedication and selflessness of all these volunteers. I would personally like to thank each and every one of them recognised at our 100 hours awards ceremony. They have made a huge contribution to people's lives and to Enfield as a whole."

To find out more about getting involved with Radio Enfield, go to http://www.radioenfield.co.uk/join/.