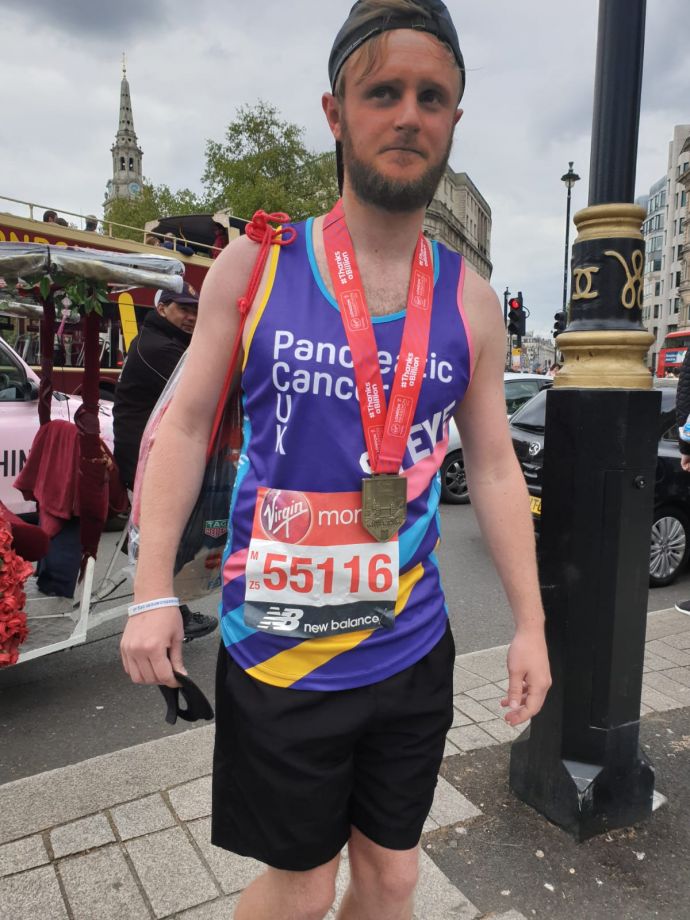 A manager at Barnet Hospital had a heartbreaking end to the marathon on Sunday after learning of the death of his close friend hours after completing the race in his honour.

Steve Dale (pictured), service manager for rheumatology, endocrinology and diabetes, chose to run the marathon for Pancreatic Cancer UK after his friend, was diagnosed with the condition in March 2019.

Steve, who is based at Barnet Hospital, completed the marathon in four hours and 46 minutes, said: “My friend, Robbo, waited for me to finish the marathon and knew I had completed it. He passed away the morning after so the whole journey has just become a lot more emotional. It was my first marathon and an absolutely amazing experience. I would absolutely do it again and again and again.”

Steve met Mr Roberts 15 years ago at Mount Grace school, where he was Steve’s teacher. Steve credits him with helping him and others achieve their potential.

Steve said: “I was going to school but not doing any work – I just wasn’t interested. But Mr Roberts guided me and helped me to achieve the grades I needed. I’ll forever be in his debt for the support he gave me. School finished and a group of us remained in close contact with Mr Roberts, or ‘Robbo’ as we called him. We played golf nearly every other weekend, watched the rugby at Twickenham and had a good craic on nights out. We all became close friends. I along with many others were devastated when we found out he had been diagnosed with pancreatic cancer.”

Steve’s target was £5,000 but he has already smashed that and raised nearly £8,000. His JustGiving page is here.

A total of 13 runners ran for the Royal Free Charity and have so far raised just under £25,000.

Aisla Carmichael works as part of the critical therapy team at the Royal Free Hospital. She has already raised nearly £1,800.

She said: “I wanted to fundraise for the Royal Free Charity, who facilitate and support our patients in every step of their hospital journey to make their experience the best it can be. From things as simple as a radio to keep them occupied, to rehabilitation equipment that allows them to leave the intensive care unit for the first time in months, each patient’s needs are individual. I want to raise money for my patients to make this life changing experience as positive a period of their lives as it can be.”

To find out more about Carly and Ailsa's inspiring stories and all the other volunteers raising money for the Royal Free Charity, as well as details of how to donate, please go here.