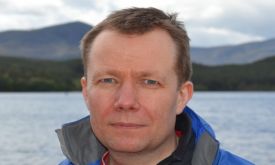 On 17 November we held our annual Marsden Lecture in the Sir William Wells Atrium at the Royal Free Hospital.

The lecture is held in honour of William Marsden, who founded the Royal Free in 1828.

This year’s speaker was Professor Jason Leitch, the national clinical director for the Scottish Government, who spoke on the topic ‘Scotland’s approach to quality improvement’.

Professor Leitch explained how Scotland organises its healthcare, with the quadruple focus – population health, patient experience, reducing per capita cost, and workforce. He said: “If the workers are content then it tends to make for a better environment for care.”

Professor Leitch described the context of the Scottish healthcare system. The reality of life in Glasgow for example is that around 16,500 children have incarcerated parents, live in single parent households, and are chronically stressed. “At 18 months you can already tell the kids who are going to have chronic disease in their 40s, and yet we spend all our money and intellect on the 40 year olds, not on the 18 month olds,” said Professor Leitch.

He also highlighted the difference in life expectancy in the various areas of Scotland, which can vary dramatically even by streets. “The inequality is unacceptable,” he said.

Professor Leitch talked about the struggles of trying to roll out a new approach to quality improvement. Quoting W Edwards Deming, who turned around companies like Sony and Toyota, he explained: “You don’t do change in the boardroom sitting down, you do change in the work standing up”.

Ask the people who see the patients, how they might be able to make it better, then use iterative testing methods to improve it.”

In 2008 the Scottish patient safety programme was launched, the first global attempt for a whole country to fix safety in its hospitals. This included 42 interventions based on evidence and discovery. One of these interventions is the surgical safety briefing, which has seen a 24% reduction in surgical mortality, no other country in the world has achieved this.

The same improvement methodology is being used outside of healthcare by Aberdeenshire Council – they have seen a three month reduction in the time from a child in care being accommodated to a permanence plan being agreed.