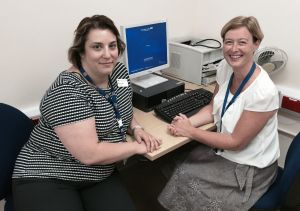 She became a transplant coordinator in 1998, a role she said she had been working towards since training at Northwick Park and Central Middlesex hospitals.

She said: “During my nursing training a transplant coordinator came to speak to us and I thought ‘that’s what I want to do’. At the time it was a relatively new area of nursing and it seemed so interesting and exciting. It was something very different.”

The coordinator role tends to be split between the management of potential transplant patients, and the on-call role, which puts coordinators at the centre of the decision to accept an organ when it becomes available.

“Day-to-day we coordinate everything for the patient from the moment they are transferred to transplant assessment through to the physical tests and assessing them to make sure that they are a good candidate, and identifying any possible problems. A lot of it is minimising risk and preparing the patient for surgery so they can get back to having a normal quality of life as soon as possible.”

She added: “When you’re on call you need to be available 24 hours a day. The specialist nurse for organ donation can come to you at any time and you have to be ready to get the teams to the hospital.

“Working in a transplant team is like working in a family. The relationship a transplant coordinator has with surgeons and doctors has to be based on a lot of trust. You call them in the middle of the night and give them the information they need to make a decision about procedure. They have to be able to trust your judgement, they trust your input, and they trust that you are able to make decisions.”

Moira said that one of her most important responsibilities is judging whether a patient should qualify for a transplant, which is often a matter of assessing whether they will be able to take care of their liver after the transplant

“An organ donation is a gift, “she said. “We have people dying on waiting lists so it is so important that the patient we select looks after their liver and understands how important that gift is.

“It is a big commitment. You have to come to clinic appointments and take medication, potentially for the rest of your life. It’s so important that a patient has a support system. We had a gentleman who lived on his own, didn’t speak good English and we didn’t have good contacts in his area. But we worked with his landlord, who lived close by, to get him through it.”

Despite 17 years’ experience working with transplant patients, Moira said there are some that have left a significant impression.

She said: “A little boy was born with neonatal haemochromatosis. We listed him on Christmas eve, we had a potential donor on Christmas Day and he was transplanted on Boxing Day. He was always special to me. That was 15 years ago and I still speak to his mother and find out how they are.”

Speaking as the UK mark’s National Transplant Week, Moira called for everyone to make sure that they are on the donor register and have made their intentions clear to their loved ones.

“Liver disease is the fifth biggest killer in the UK, and the need for transplants is growing,” she said. “Everyone should be on the donor register, particularly if they would accept a transplant if they needed one.”