To mark world orthoptic day today we decided to find out more about what one of the trust’s orthoptists, Haneen Al-Jumaily, does at the Royal Free London (RFL). 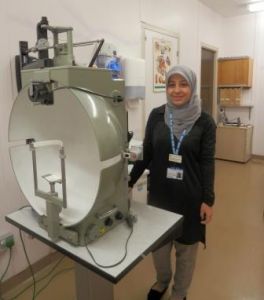 Haneen is one of 11 orthoptists who work at the RFL, seeing patients at clinics at the Royal Free Hospital, Barnet Hospital, Edgware Hospital and the Whittington Hospital.

Haneen said: “We are allied health professionals, which is the group of clinicians who aren’t doctors or nurses. It includes podiatrists, physiotherapists and dieticians.

“We work alongside ophthalmologists, eye doctors, to look after patients who have binocular problems, which are problems using the eyes together, or abnormalities in their eye movements.”

Haneen cares for a wide range of patients, including premature babies, patients with double vision, children with a turn in their eye, diabetic patients and patients recovering from a stroke.

She said she first became interested in the profession when she was a teenager: “Because I wore glasses as a child, I always wanted to study optometry.

“But I did work experience in Manchester Royal Eye Hospital when I was doing my A levels and I discovered I was more interested in the work done by the orthoptists.”

Haneen studied for three years at Liverpool University, one of only three centres to teach orthoptics in the UK. After working in Hull and East Yorkshire she has now worked at the RFL for almost a year.

She explained why she likes the job: “I like the fact that the days aren’t repetitive, every day we see new patients. I also love working with different people, with nurses, doctors, therapists, with all different members of staff. I work as part of a multi-disciplinary team so we all work together to provide care for each patient.”

Image: Haneen Al-Jumaily in the eye clinic at the Royal Free Hospital.