Tulip Siddiq, MP for Hampstead and Kilburn, invited the Royal Free Charity to the Houses of Parliament on Wednesday to celebrate the Royal Free young volunteers programme. 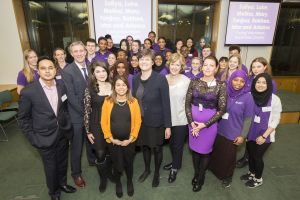 Staff from the Royal Free London joined representatives from across the voluntary, charity and public sectors to hail the charity’s programme as a model of best practice in helping young people participate in positive social action.

Since its launch in May 2015, the programme has recruited more than 120 volunteers, and there are currently 90 young people volunteering at the Royal Free Hospital. The young volunteers are recruited locally, with the most living in Camden or nearby parts of Barnet, Brent, Islington and Haringey. The volunteers have a huge impact on the hospital. They take up a range of roles to support staff and benefit patients, such as acting as hospital guides or assisting patients during lunch and dinner.

They are also given personal and skills-based training and mentoring, and invited to take part in a variety of activities, such as food bank collections, tea parties for older people who are lonely and isolated, and group discussions on issues around public health and the NHS.

At Wednesday’s event the volunteers shared their experiences and perspectives on how volunteering has benefitted them and changed their perceptions on healthcare and other health issues, such as dementia.

Guests enjoyed participating in activities that illustrated the roles young volunteers take up in the hospital. This included demonstrating the games they play with dementia patients, and taking requests for songs to play on the juke box.

Speaking on Wednesday Tulip Siddiq stressed the value and compassion that volunteers bring to the hospital and her community.

Danielle Wilde, dementia lead at the Royal Free London, spoke passionately on the theme of viewing dementia as a cultural problem rather than a medical one. She said that the young volunteers programme was amongst the most valuable kind of work that we can do to help those living with dementia.

Tulip said: “I was so proud to host the amazing volunteers of the Royal Free in Westminster on Wednesday. The innovative program which is being run at the RFH should be used as an example across the country for how to harness the positive spirit of volunteerism and the energy of our young people.”

Desiree Benson, young volunteers programme coordinator, said: “The programme has shown that these young people have huge levels of compassion, which has enabled them to engage directly with those most vulnerable in society. I have been immensely proud of each and every person who has been a part of the programme. I am also thankful to Tulip for inviting us to demonstrate our support for patients, staff and the NHS.”

Young volunteer Rakhee Bharj, 18, said: “To start with, we all choose to volunteer for different reasons, but together we realised that we all want the same things. We enjoy meeting new people and helping them in the small ways that we can.”

Fellow Tanjina Uddin, 16, said: “Coming together, we also realise we are part of something much bigger. We are passionate about being a part of this amazing and supportive environment.”

Istar Mohamed, 17, added: “We learn so much from the hardworking staff who we are lucky to work alongside. We believe in helping other people and taking responsibility in creating a strong and fair society.”

The Royal Free Charity provides the little touches and big differences, including volunteer meet and greeters to help people find their way around, slippers for elderly patients and care packs for patients who may have arrived with nothing with them.

We also support the big projects that make a difference, from specialist medical equipment to art work that brightens up hospital corridors.