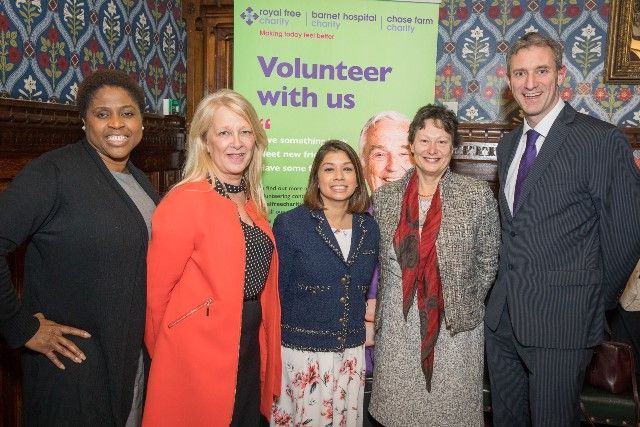 Last week Tulip Siddiq MP paid tribute to the outstanding work of the Royal Free Charity’s volunteer team. The MP for Kilburn and Hampstead hosted an event for volunteers and hospital staff at the Jubilee Room, Palace of Westminster. The occasion highlighted the important role that volunteers play within the Royal Free London NHS Foundation Trust and was an opportunity to congratulate the volunteers on all their hard work.

The Royal Free Charity works across the trust’s sites including the Royal Free Hospital, Barnet Hospital, Chase Farm Hospital and some of the satellite sites. There are currently over 750 volunteers, sporting the recognisable purple charity shirts and ranging in age from 16 to 95. Last year these amazing volunteers provided over 60,000 hours of voluntary work supporting patients and staff across the trust including:

• 138,000 patients and visitors were helped to find their way around the hospital sites to appointments and to visit patients
• 935 dementia patients received companionship from specially trained volunteers
• 33,000 patients received massages during their chemotherapy treatment and before surgery.
• 3,560 people had interactions with a therapy dog

Head of Volunteering for the Royal Free Charity, Jenny Todd, said: “Our amazing team of purple-topped volunteers are well known throughout the hospitals and it’s great to see them getting some recognition in the wider community.”

At the parliamentary event volunteers and staff shared their experiences and perspectives on how volunteering has benefitted them. They also discussed the impact they have had on the patients and staff at their local hospital.

Tulip Siddiq recounted her experiences at the Royal Free Hospital praising a volunteer who had helped her husband, who had a broken leg. "A volunteer came out of nowhere with a cushion for my husband's leg. I asked, ‘Who are you?’. She said, 'I'm just a volunteer'. I said, ‘You made my husband very comfortable so don’t say just a volunteer you’re very important'."

All the Royal Free Charity volunteers are recruited locally, with most living in the boroughs around the hospitals. The volunteers take up roles which support staff and benefit patients, such as acting as hospital guides or assisting patients during lunch and dinner, supporting dementia patients, providing beauty therapy, running the book trolley and shop trolley services and much more.

Tulip stressed the value and compassion that volunteers bring to the hospital and her community. She has been a champion for the charity since 2016, previously hosting an event at Parliament to promote the charity’s programme as a model of best practice in helping young people participate in positive social action.

In addition the Royal Free Charity’s volunteers are given personal and skills-based training and mentoring, and invited to take part in a variety of activities, such as food bank collections, tea parties for older people who are lonely and isolated, knitting groups and group discussions on issues around public health and the NHS.