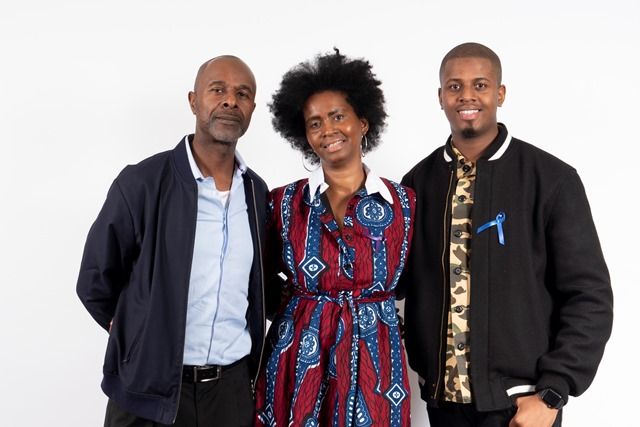 Vanessa James says she has never regretted the decision she made to donate a kidney to her music-producer son at the Royal Free Hospital (RFH) two years ago.

Now to mark organ donation week (2-8 September) she is urging families, especially from black, Asian and minority ethnic (BAME) backgrounds, to discuss organ donation openly as it could potentially mean the difference between life and death.

Vanessa’s son Jamal had just completed his GCSEs, loved playing basketball and was an active teenager.

But a number of unusual symptoms were worrying his mum.

Vanessa, who lives in Acton, said: “I had to take Jamal a few times to A&E because he was getting incredibly painful bouts of indigestion. I was being told to just give him over-the-counter medication to combat that. But one morning I looked at him and could see how swollen his legs and feet were.”

After a second GP appointment Jamal was referred to Central Middlesex Hospital for blood tests and checks, where they swiftly suspected a problem with his kidneys because they could tell they weren’t functioning properly. From there Jamal was taken to the RFH by ambulance.

A biopsy was performed but it still took about a week before Jamal was diagnosed with nephrotic syndrome, which is kidney disease involving inflammation. At just 17-years-old the once active teenager was now taking 17 tablets a day.

Determined as ever Jamal enrolled in college to study music production.

Vanessa says: “He was fantastic. Despite the fatigue, swelling and cramps he kept going in, even if he was collapsing on our sofa in the evenings. He really took hold of his condition and we never had to worry that he wasn’t looking after himself.”

But four years after he was first diagnosed, Jamal’s condition began to deteriorate further and his doctors warned that he needed a transplant. He was forced to defer university for a year – he had got a place at Kingston University to continue his music production studies.

Both Vanessa and her husband, Michael, were tested and Vanessa was found to be the better match.

Vanessa said: “I just used to look at Jamal every day and want him to be well. His kidney function was now just 10%. I just knew as his mother it was the right thing to do.”

She said: “I remember my anaesthetist being so kind and asking what was my favourite music and I mentioned an R&B soul singer called Jill Scott and he put it on for me to be put under  – it felt just like being at home and going to bed!”

“The day after the op one of the nurses said I needed to get up and start moving and said why didn’t I go and see Jamal. I was in pain but when I saw him he already looked totally different. He looked like everything had lifted from him. His complexion was better, I could see his eyes sparking.

“The care both Jamal and I received at the Royal Free Hospital was fantastic. Our donor nurse looked after both of us for the whole journey and Jamal’s surgeon, Bimbi Fernando, was superb, as was mine.

“At first afterwards I felt ‘Oh my gosh my body has changed’. I have had five children but not a Caesarean so I was a bit taken aback at the scar but actually time heals and it really isn’t that bad. The great thing is my mum and dad and husband were all around and of course I wanted to help Jamal so I think I wished myself well faster!”

Fast forward two years and Jamal has now graduated from Kingston University with a music degree in and is already working in the music industry as a DJ and producer.

He said: “When I was first diagnosed with nephrotic syndrome, I didn’t really understand what was going on. I just felt very tired all the time and bloated, I slowly became less and less able to keep up with my basketball training. I had to adapt to a new way of living, taking a lot of medication and resting a lot. I managed to plod along like this for a couple of years then the doctors said I’d be in need of transplant very soon as my kidney function was deteriorating steadily.

“I was scared at first not knowing what would be the outcome. Then my parents got tested and although both were a match, mum insisted she would put herself forward to be my donor.

After the transplant, I had a new lease of life. My energy levels increased and straight away the kidney made a significant difference.

“I love my mum so much, the bond we have has grown even stronger – she turned my life around, she gave my life back to me. I’m so proud of her she’s amazing and I’m truly thankful for her gift of life.”

Vanessa added: “I am so happy that I was able to help Jamal and I think I did what any mother would do for their child. I know though that there is a real shortage of organ donation in the black and ethnic community, even though many of the conditions that can lead to organ failure are very prevalent in our populations.

“As we mark organ donation week I would like the black and ethnic communities to think about the role they can play in encouraging organ donation such as having clear conversations with their families about what they would like to happen with their organs in the event of their death. I know it can be a difficult subject but I would urge people to share their wishes.”

Bimbi Fernando, who was Jamal’s kidney transplant surgeon, said: “I am delighted to hear Jamal is doing so well. But every day across the UK people in need of a transplant die because there aren’t enough organs to go round and we really need to increase support for organ donation, especially among black, Asian, mixed race and minority ethnic communities, as while consent rates in these communities are increasing they are still far less likely to support donation going ahead than white families.

If you die in circumstances where you could become an organ donor, specialist nurses will ask your family to support your decision to donate.

“Less than half of families agree to organ donation if they aren’t aware of their relative’s decision to be a donor. But approximately 90% of families do give their consent when they are aware. During an emotional and difficult time, knowing about your decision would make it much easier for them to support your wishes.”

The RFH is a leading kidney and liver transplant centre in the UK. Staff carry out more than 200 liver and kidney transplants each year.