Mark Fitzgerald says that if it hadn’t been for the generosity of a family who had agreed to organ donation he wouldn’t be here today. 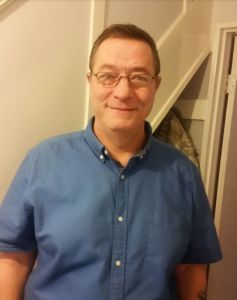 The 50-year-old from Berkshire had a liver transplant at the Royal Free Hospital last year after developing alcohol-related liver disease.

Before patients are given a liver transplant they must be able to demonstrate that they can stop drinking and go through a period of abstinence. In her 13 years at the Royal Free Hospital, Liz has helped hundreds of patients – including Mark - prepare for a transplant by remaining ‘dry’ and given them the advice and support they need to ensure the transplant has the best chance of succeeding and the patients can remain healthy after their operation.

Mark, who works as a painter and decorator, said he first became ill in his mid-forties, when he started to drink more heavily. “I had been drinking a fair amount most of my life – since I was 18,” he said. “But I started to drink more heavily at around the age of 45.  I would drink about six cans of strong beer every night – more at the weekends. I could never get rid of the hangover. I didn’t drink during the day but I always felt awful, I don’t know how I managed.

“I was always miserable and ratty and I took things out on the people who were close to me – it wasn’t pleasant for them.”

Not long after that Mark, who is a father of two, started to feel unwell and extremely tired – often going to bed at 8pm. Then an incident took place in the middle of the night and Mark ended up in hospital.

“I woke up sweating,” he said. “I managed to get to the toilet and then I was vomiting blood. We called an ambulance and they took me straight to hospital. I lost so much blood that I had to have a transfusion. It was life or death at that point. It was a wake-up call and when I was still in hospital recovering I thought, I’m not going through that again, and I made up my mind not to drink any more and I went cold turkey.”

Giving up alcohol wasn’t as tough for Mark as it is for some people. He attended Alcoholics Anonymous for about five sessions but found it didn’t suit him and he was able to stay off the alcohol without it - even going to the pub with friends without having a drink.

Mark’s doctors hoped that with abstinence and medication his liver would make a recovery. However, it continued to deteriorate and it was decided he should be referred to the Royal Free Hospital for a possible liver transplant. That is when he received help and support from Liz.

“I felt scared when they told me about having a transplant – but relieved as well,” said Mark. “I knew this would be the best thing for me.

“Liz and the medical team talked me through everything and supported me. They told me I could go on the transplant list and then it was only another week before I got the call to say a liver is available – it was in the middle of the night I was scared at that point, I was really scared. I had to go on my own as my partner Paula couldn’t afford to take any time off work. I didn’t have my kids with me as I didn’t want to worry them.

“Then I woke up 12 hours later - I felt absolutely terrible!  I was in intensive care and I had to stay there for two days until I was well enough to get back on the ward. A few days later I started feeling better and then I felt 100 per cent - better than I had felt in a long time.”

Mark, who has continued to abstain from drinking alcohol, says his liver is now working really well, and he feels in great condition. “I feel so much better than I did before – I am running around at 100 miles an hour,” he said. “I am planning to write a letter to the family of the person who donated the liver – to say thank you, as without them I wouldn’t be here.”

Image: Mark Fitzgerald, who had a liver transplant last year.