A photograph of a newborn baby, which was taken at a Royal Free London neonatal unit, has been nominated for a prestigious award.

The image of a premature baby receiving light therapy at Barnet Hospital won the Julie Dorrington Award for outstanding clinical photography in a clinical environment at the Wellcome Image Awards 2016. It was taken by medical photographer David Bishop, who works for UCL Health Creatives and is based at the Royal Free Hospital. 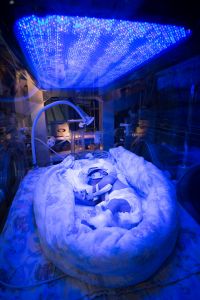 The image shows Francis Hodgson who was 16 days old at the time the picture was taken, being treated with ultraviolet light in the Starlight neonatal unit at Barnet Hospital. Francis, who is now 14 months old, was born 12 weeks premature and weighed just 2lbs 2oz at birth.

Prize judge Fergus Walsh, the BBC’s medical correspondent, said of the picture: “Cocooned in an incubator, a tiny premature baby sleeps while receiving ultraviolet phototherapy to combat the threat of jaundice. The whole image is cast in a beautiful blue light – the judges felt it perfectly captured the vulnerability of a newborn, whilst keeping a respectful and discreet distance from the subject.”

Francis’s mum Angela Brightly, from Enfield Lock, said: “He has come such a long way since then and I am happy with how he is developing. He still has some problems with his lungs, but he is so much better than he was then.”

David, who took the photograph as part of a Barnet Hospital Charity project promoting the neonatal unit, said: “I didn’t expect to win; it was really quite a surprise. I knew while I was taking it that the picture was something special. The staff who work there are amazing and it is such a tranquil space. It was very important while taking pictures to maintain that tranquillity and not be disruptive. It’s a very special unit. I really wanted to show it off to the world.”

He added: “I’m very grateful to win the award. I’m still in shock. Photography is my life so it is lovely to be recognised for it.”

A picture taken by David inside the Royal Free Hospital’s high-level isolation unit was also nominated for a Wellcome Image Award.