A new company, set up by a doctor at the Royal Free Hospital, aims to combine academic creativity with private sector investment and experience to bring new, more effective treatments to patients sooner. 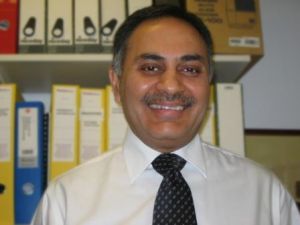 Freeline Therapeutics, which will be based at the Royal Free Hospital, is focused on developing gene therapies for haemophilia and other single-gene disorders, such as Gaucher’s disease.

Professor Nathwani, said: “This company is based around our invention and supported by highly talented people from industry with experience and know-how of how to develop drugs for the world-wide market. Its location at the Royal Free Hospital will mean close collaboration between researchers and clinical staff and their work will be supported by a team from industry with special skills in drug development.

“With a £25 million investment from Syncona, an investment arm of the Wellcome Trust, and support from UCL Business, we will have an opportunity to build a world class company that will accelerate research and the development of new drugs. Additionally, the creation of new jobs and a rich seam of specialist skills at the Royal Free Hospital will cement the trust’s reputation for creating cutting edge treatments for patients.”