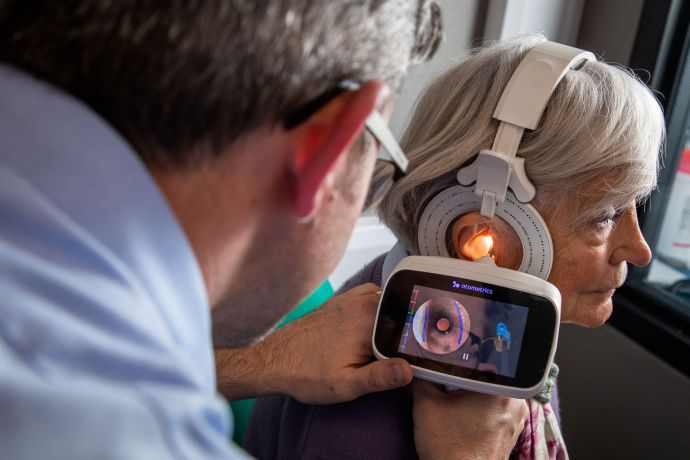 A cutting-edge scanner which uses a laser beam to digitally recreate a patient’s ear canal is transforming how hearing aids are produced.

The Otoscan, which is being used on NHS patients for the first time at the Royal Free Hospital, has a miniature camera which captures images of the laser beam as it moves across the surfaces of the ear. Algorithms then convert that into a 3D image of the inside of the ear to create the perfect fitted hearing aid insert.

This is the first time a scanner has been developed which can accurately scan the inner ear, which is a complex shape with sharply curved surfaces, flat surfaces, and narrow openings.

Until now silicone moulds have been used to create impressions of a patient’s ear canal – a process which has not been updated in 20 years.

The scanner, developed by Otometrics, produces a much more accurate image of the ear canal than a mould would do, which means that hearing aids inserts which better fit patients can be made.

It is also a much quicker process as the images can be sent via the internet to the manufacturer, Sonic Labs, who use a 3D printer to produce the insert that attaches to the hearing aid.

Mitch Chandler, chief audiologist at the Royal Free Hospital, said: “This is a huge breakthrough for patients and saves us time and money.

“The old process involves using a silicone-based putty that is pumped into the ear canal and left for around four or five minutes to set and produce an impression of the ear. It’s not a very pleasant experience for patients as it completely blocks the ear and leaves an oily, itchy ear canal.

“The scanner allows us to recreate a much more accurate image of the ear canal which means the insert and the hearing aid will be a much better fit.”

Mitch estimates that every month 130 moulds can now be created for patients at the Royal Free Hospital.

“I think we will save about £105 a month in making and posting the moulds to the manufacturer,” he said. “But using the scanner is so much more efficient as the turnaround time to receiving the insert for the hearing aid will be cut from 10 days to two.”

And he said that patients who lose their hearing aid can get a replacement much more quickly.

“Instead of the patient coming in for another mould, we can re-order a new insert for the hearing aid straight away as we will have their scan on file,” added Mitch.

Patient Elizabeth Coll said the new scanner was a ‘clever bit of equipment.

“It’s much more comfortable than the old way of taking shapes of my ears," she said. “It means we no longer have to have the wax material in my ears, nor the irritation from the oto-stops - small piece of foam that is placed deep in the canal).

“The experience as a whole has been much better, with a quicker turnaround and a more comfortable procedure. I had a sore in my ear from my old moulds and this scanner has meant a new mould could be made with causing any further pain.”

Fatima Pridmore, managing director of Sonic Labs, said that the benefits of the new scanner are ‘really positive’.

She explained that rather than waiting to receive the mould by post from the trust, the company are now notified as soon as the image is uploaded, and can start to print the insert immediately.

“An insert takes an hour to print and we will send it back to the hospital the same day,” she said.

Jonathan Kennedy, Natus chief executive [the parent company of Otometrics] said: “We have always considered the NHS to be a vital partner in the development and deployment of cutting edge technology.

“The Otoscan product offers a digital solution to an analogue procedure, in line with the NHS Digital strategy to harness innovative technology to increase efficiency and productivity for NHS departments and ultimately improve patient care.”