A new diagnostic test for a heart condition is being offered at Barnet Hospital for the first time.

Consultant cardiologist Raj Khiani, who is the lead for arrhythmia services at the Royal Free London, is now offering a test which can help doctors determine whether a patient has Brugada syndrome – a condition which can lead to dangerous heart rhythms. 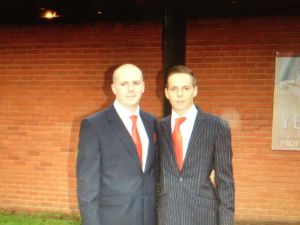 For people with Brugada syndrome, even though their heart pumps and looks normal, it's possible for sudden electrical activity to lead to an abnormally rapid heart rhythm, called arrhythmia.

Not everyone with Brugada syndrome experiences arrhythmia, but when it does happen, it can cause fainting or heart palpitations and it can be fatal. Brugada syndrome is an inherited condition and it typically affects young and middle-aged men who are otherwise healthy, although women can also be affected. It's also more common in young men of Japanese and South East Asian descent.

Dr Khiani said: “Having Brugada syndrome shouldn’t change a patient’s life too much. There are some drugs which shouldn’t be taken, like some anaesthetic agents and anti-depressants. But exercise is not a risk.”

The test, which was not previously offered at Barnet Hospital, involves giving patients a drug called ajmaline while their heart is being monitored by an ECG in the catheterisation lab.

Last year brothers Matt, 23, and Ray Fenn, 27, both had the diagnostic procedure, after their father Roy died suddenly in 2015 of an undiagnosed heart condition.

Matt said: “They didn’t know why my dad died. He was only 56, so it was a shock. At the inquest into his death the coroner recommended that my brother and I be tested for a range of heart conditions as they thought it was possible that that was the cause of my dad’s death.”

The brothers came to Barnet Hospital on separate days for the ajmaline test and received the results the same day.

Dr Khiani said: “The ECG showed the continuous electrical activity of Matt’s heart, while he was given ajmaline. If Matt had the condition, we would have seen a change in the electrical patterns of his heart on his ECG. This means he doesn’t have the condition.

“The drug inhibits sodium levels and so it effectively brings out the ECG changes of Brugada and rarely can cause heart arrhythmias, but because Matt was being monitored within a clinical environment he was completely safe.”

However, when Ray came to Barnet Hospital there was a different result – the activity in his heart indicated that he might have the condition and he was referred to St Bartholomew’s Hospital for further tests.

Ray said: “The test result indicated that I could have Brugada syndrome so further investigations were needed.

“When I came to Barnet Hospital Dr Khiani and all the staff were great, I was very impressed,” said Ray. “They put me at ease during the day so I didn’t feel too worried about doing the test. I was a bit gutted at first when the test came back positive, but it’s better to know so I am able take precautions.”

A small monitoring device was fitted in Ray’s chest, just under the skin. The device sends information about his heart’s daily activity to the team at Barnet Hospital and he has now been to St Bartholomew’s Hospital for further tests.

It is expected that around 20 patients per year will be referred to Barnet Hospital for the procedure.

Dr Khiani added: “We are pleased that we are able to offer this diagnostic test to patients at Barnet Hospital. We are currently developing the cardiac rhythm management service, which means that we are able to offer patients a range of cardiac procedures. This test is another important component of this service and is one area in which we are improving care for patients at Barnet Hospital.”

More information about Brugada syndrome can be found here.