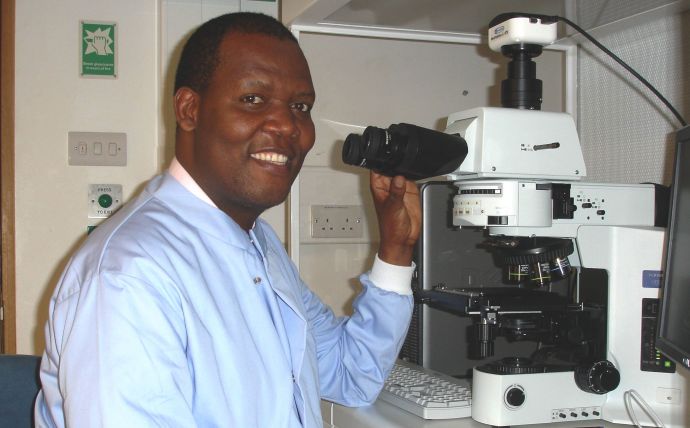 A new potential weapon in the fight against possible deadly bacteria such as MRSA, which are increasingly developing resistance to widely used antibiotics, has been developed at the Royal Free Hospital.

New research, published in Nature Scientific Reports, and led by Dr Joseph Ndieyira, a scientist at University College London, based at the Royal Free Hospital, shows that bacteria that have developed resistance can successfully be killed, by mechanically bursting the cell like an overinflated balloon. In most previous work on antimicrobial activity cell death was presumed to be primarily caused by stopping a cellular function.

“For the first time we’ve shown that you can actually kill the bacteria by using force,” said Dr Ndieyira. “We’ve discovered that some antibiotics might be able to be used not only in far smaller quantities but also more effectively because of the particular way they work on the membrane of the bacteria.

“Often the drug will be particularly successful because it clusters on the bacteria very firmly without being pushed away and in turn delivers a damaging strain to the bacteria’s surface as it creates a line of weakness. Without a proper protective wall the internal cell pressure blows up the bug.”

Dr Ndieyira and his team used nano-cantilever force based technology. This meant using a tiny force sensor made out of silicon, resembling a miniscule diving board only half the width of a human hair, to measure the smallest changes in mechanical strain caused by antibiotic binding and the associated strength by which bactericidal antibiotics latch onto bacterial surface.

Scientists found that ortivancin pressed into resistant bacteria with a force 11,000 times stronger than vancomycin. Oritavancin is a fast-acting antibiotic normally used for skin infections and vancomycin is a powerful antibiotic used as the last resort treatment for streptococcal and staphylococcal bacteria including methicillin-resistant Staphylococcus aureus (MRSA). Although ortavancin is a modified version of vancomycin, the new study suggests that it kills bacteria in a completely different way.

Because the drugs tested by scientists are already in use the researchers hope that it won’t be long before the novel idea of mechanical force is exploited to create more effective therapies to combat bacterial infections caused by multi-drug resistant bugs.

Dr Ndieyira said: “This has the potential to be an incredibly effective way of fighting bacteria as it works faster and could also be cheaper if you are able to use smaller doses. For resistant bacteria the problem has been that a significantly high dose of antibiotic would be needed to kill them but unfortunately the same dose might kill the patient as well. The beauty of the new approach is that you would be looking at much smaller, safer doses.”

Dr Ndieyira believes the new research will lead to people revisiting old antibiotics that may have been overlooked in the past but which actually have superior powers of generating more forces the bacteria can’t withstand. He also optimistic the work could help develop a new generation of antibiotics. He said: “This work will help us tackle one of the greatest global threats in modern healthcare.”