A new method of carrying out lung biopsies could free up hospital beds and increase tenfold the number of life-saving tests carried out each year, researchers at the Royal Free London’s Barnet Hospital believe. 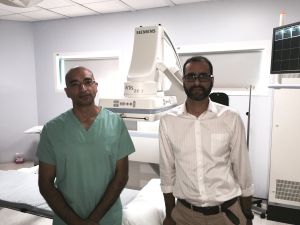 In most hospitals throughout the UK and the world, patients who undergo even routine lung biopsies are admitted to a hospital bed and remain in hospital for four to six hours in order to monitor for lung collapse (pneumothorax).

However, research carried out using Barnet Hospital’s innovative ambulatory lung biopsy service has shown that the vast majority of patients can be treated as out-patients, and discharged just 30 minutes after the biopsy.

The use of a small, compact device called the Heimlich valve chest drain (HVCD), instead of a traditional bulky chest drain, also allows patients who do experience pneumothorax to be treated safely and effectively in their own home and in a fraction of the time.

Researchers suggest the new method could free up hundreds of hospital beds, while also allowing more patients to undergo diagnostic biopsy in a much shorter space of time, leading to earlier lung cancer diagnosis.

Dr Sam Hare, consultant thoracic radiologist and chief of radiology at Barnet Hospital, began piloting the new method in 2011 after returning from a thoracic radiology fellowship at The Ottawa Hospital in Canada, where the biopsy technique was well established. Currently, Barnet Hospital, which forms part of the Royal Free London NHS Foundation Trust, is the only European hospital using the early discharge/out-patient HVCD method. However, Dr Hare believes the practice is potentially replicable throughout the NHS.

“It made me realise that the current process is outdated and needs to change,” he said. “This really is a paradigm shift in the way we carry out lung biopsies. Lung cancer is the leading cause of European cancer deaths, but despite huge advances in therapies, many patients are missing out on cutting edge treatment due either to delays in diagnosis or being declined lung biopsy altogether.

“Normally when booking a lung biopsy there is an inherent delay, because you have to first book an elective in-patient bed for post-biopsy monitoring. And if there are no beds available you have to re-schedule the biopsy appointment.

“But under this new system we are not dependent on hospital beds so we can get a lot of people through the door. Whereas most hospitals are able to do around 30 biopsies a year, we have done 138 in the last four months alone.

“Discussions between our radiology, respiratory and oncology services in 2011 also highlighted a history of both frail patients and patients with bad emphysema refusing to undergo biopsy because they didn’t want a prolonged hospital admission in the event of lung collapse. Furthermore, many patients would have been declined biopsy in case of a life-threatening collapsed lung. But with this method we can perform lung biopsy on a wider range of patients because we can treat a collapsed lung quickly and easily and crucially as an outpatient.”

Between 2011 and 2015, 489 patients underwent an out-patient lung biopsy before being x-rayed for signs of lung collapse after only 30 minutes. Of those patients, 402 were successfully discharged at 30 minutes without further complication.

Of the remaining 87 patients, 35 experienced pneumothorax but were ruled eligible for discharge without further treatment. 52 were successfully fitted with HVCD and also discharged within 60 minutes.

The 52 patients discharged with the HVCD (a discreet device which can be inserted into the chest and under clothes, allowing air to pass in a single direction only) were asked to monitor their pneumothorax and return to hospital once it had resolved. Under standard NHS practice these patients would have necessitated prolonged hospital admission, often for many days.

No patients required hospital admission following biopsy, and no patients were forced to return to A&E due to complications following the procedure.

Dr Hare added: “The feedback from patients has been strongly positive as the whole biopsy process is significantly shortened and there is no need for hospital admission. It also reduces the psychological impact of a potential cancer diagnosis on the patient and their families as they spend less time in hospital waiting for results and procedures.

“Scaling this practice across the NHS would revolutionise the UK lung cancer landscape through earlier lung cancer diagnosis and increased patient throughput."

At 92, retired barber Kypros Savva might ordinarily have been refused a lung biopsy due to a high risk of lung collapse, or faced delays while hospitals administrators tried to find him a bed. However, clinicians at Barnet Hospital were confident that they would be able to treat any pneumothorax safely and effectively with the HVCD, and went ahead with a biopsy to determine the nature of a mass found in Mr Savva's lung on a chest x-ray.

He said: “The biopsy went fine. In the end I did experience a lung collapse but it was all very straightforward to treat. There was nothing to panic about.”

The biopsy revealed a malignant tumour in Mr Savva’s lung, which was surgically removed shortly after.

His son-in-law Nick Georgiou said: “We were quite amazed by how well it all went. We were worried that because of his age people wouldn’t have wanted to do anything for him.

“For us the whole thing went swimmingly, from the biopsy to the treatment of the lung collapse, to the operation. His recovery has been fantastic.”

The findings of the study at Barnet Hospital have been recently published in the Thorax, the official journal of the British Thoracic Society and part of the British Medical Journal group.