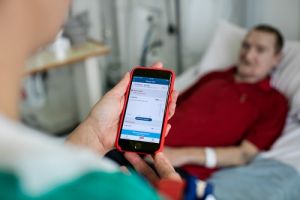 Lives could be saved and patient safety dramatically improved thanks to a landmark partnership announced today between the Royal Free London NHS Foundation Trust and British technology company DeepMind.

The five-year landmark agreement will see some of the best minds in healthcare and technology working together to transform care through a mobile clinical application called Streams, which will deliver improved outcomes by getting the right data to the right clinician at the right time. Like breaking news alerts on a mobile phone, the technology will notify nurses and doctors immediately when test results show a patient is at risk of becoming seriously ill, and provide all the information they need to take action.

As the technology is developed, the Royal Free London and DeepMind believe Streams will:

Work on Streams started just over a year ago, and in that time clinicians from the Royal Free London and technologists from DeepMind have taken it from idea to reality, designing a prototype version of the app to help clinicians detect acute kidney injury (AKI) at its earliest stages, to prevent serious illness and death. It is estimated that treating AKI costs the NHS in excess of £1billion a year.

Following prototype testing, as well as registration with the Medicines and Healthcare products Regulatory Agency (MHRA), this first version of Streams is ready to be deployed to clinicians across the Royal Free Hospital sites early in 2017. It is expected to result in an immediate improvement in AKI-related patient safety and outcomes.

Under the new five-year partnership, additional features such as clinical task management will be added to Streams and it will be used to support doctors and nurses in caring for patients at risk of other illnesses such as sepsis and organ failure.

The ultimate version of the Streams app will alert doctors and nurses to patients who need their attention in seconds rather than hours, reducing the number of patients who deteriorate in hospital without a clinician being aware. Streams will be extended beyond AKI to help care for patients with other serious conditions including sepsis and organ failure. At least ten thousand people a year die in UK hospitals through entirely preventable causes, and some 40% of patients could avoid being admitted to intensive care, if the right clinician was able to take the right action sooner.

It will also put the most important patient information in the palm of clinicians’ hands, allowing them to view and update records and assign clinical tasks to each other from their mobile - with no more shuffling through paper, pager alerts and multiple desktop systems. The Royal College of Physicians has reported that two in five doctors in training consider the administrative burden of their jobs to have a serious negative impact on patient safety in their hospital. Streams technology could substantially reduce this, enabling doctors and nurses at the Royal Free London to redirect an estimated 500,000 hours per year into direct patient care.

David Sloman is chief executive of the Royal Free London which was recently named as a ‘global exemplar’ in health technology by the Department of Health. As part of this, the trust pledged to invest in technology, digital infrastructure and training for staff, which will help make its services more efficient and easier for patients to access.

Mr Sloman said: “We are hugely excited by the opportunity this partnership presents to patients and staff. We want to lead the way in healthcare technology and this new clinical app will enable us to provide safer and faster care to patients – which will save lives.

“Doctors and nurses currently spend far too much time on paperwork, and we believe this technology could substantially reduce this burden, enabling doctors and nurses to spend more time on what they do best - treating patients."

Stephen Powis, medical director, Royal Free London, said: “Clinicians face real challenges when it comes to detecting conditions like AKI – patients deteriorate rapidly and it can be hours before this is picked up due to the limitations of current NHS technology and the reliance on manual observations and intuition. This is about bringing information to doctors and nurses, much in the way we get news alerts on our phones. We know that a quarter  of deaths from AKI are preventable if clinicians are able to intervene earlier and more effectively.”

“We cannot do this alone and we need to work with world leading partners, and I am delighted that the Royal Free are going to be able to use the brilliant technology and innovation offered by a partner of the stature of DeepMind to help deliver better, safer care to their patients. I commend them for their initiative and wish them every success with the venture.”

The partnership will also introduce an unprecedented level of data security and audit. All data access is logged, and subject to review by the Royal Free London as well as DeepMind Health’s nine Independent Reviewers. In addition, DeepMind’s software and data centres will undergo deep technical audits by experts commissioned by its Independent Reviewers. 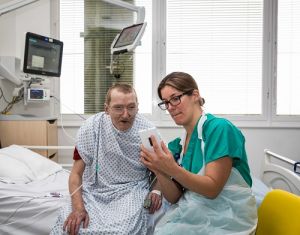 Furthermore, DeepMind is developing an unprecedented new infrastructure that will enable ongoing audit by the Royal Free London, allowing administrators to easily and continually verify exactly when, where, by whom and for what purpose patient information is accessed. This is being built by one of the world’s leading security engineers, Ben Laurie, co-founder of the OpenSSL project which enables encrypted connections to websites around the world (familiar to millions through the padlock in their browser bars).

The infrastructure that powers Streams is built on state-of-the-art open and interoperable standards, allowing the Royal Free London to have other developers build new services that integrate more easily with their systems. This will dramatically reduce the barrier to entry for developers who want to build for the NHS, opening up a wave of innovation - including the potential for the first artificial intelligence-enabled tools, whether developed by DeepMind or others.

DeepMind co-founder Mustafa Suleyman said: “'The NHS is one of the best health care services in the world, yet our nurses and doctors are still wrestling with pagers and paper-based systems to save lives.

“We’re working with the Royal Free to give clinicians the information they need at their fingertips, saving time and alerting them to patients in need in seconds not hours.

“Privacy and trust are paramount, and we’re holding ourselves to an unprecedented level of oversight by publishing our agreements publicly and engaging nine respected public figures to scrutinise our work in the public interest.”

Michael Wise, a patient whose life was changed by acute kidney injury in 2009, said: “I have experienced the severest form of AKI, which occurred without warning and has had a profound affect on me and my family’s lives. With the large number of preventable deaths attributed to AKI and the devastating effect that it has on the lives of those who survive it, something needs to be done to address these issues. With the enormous amount of data that needs to be processed by a clinician, it is easy to overlook the early warning signs of this condition, and I applaud the development of the DeepMind Streams app to address this.”

David Myers, President of the Royal Free Kidney Patients Association, said: “As a kidney patient for more than 25 years I am really excited about the potential of the Streams AKI app. This seems to me something that will revolutionise the speed with which AKI patients will be cared for. I think this system could not only save lives but could improve patients’ chances of living longer whilst reducing their stay in hospital. This must not only benefit patients by ensuring that they receive the correct care immediately but also should reduce the cost of caring for patients if AKI incidents are recognised at an early stage. ”

Background note on AKI and how Streams currently works

The kidneys perform a number of important functions. As well as regulating the volume and composition of fluids in the body, they also remove waste products from the blood as urine. Acute Kidney Injury (AKI) is the generic term for an abrupt deterioration in kidney function. There are a number of possible causes of AKI:

AKI can be diagnosed by a simple blood test that measures levels of a waste product called creatinine, or by a fall in the rate of urine production. There is a nationally agreed system of grading the severity of AKI that separates patients into one of three categories, depending on how large the rise in creatinine is. Using these criteria, AKI is found in as many as one in five emergency admissions to hospital. It is particularly common in the elderly, and its occurrence is thought to be increasing. In its most severe form, AKI can lead to organ failure and death. However, even in milder forms, it is associated with a range of poor outcomes, including significantly longer hospital stays and a lifelong reduction in kidney function.

It is thought that the number of extra deaths in England each year associated with an episode of AKI may approach 40,000. The financial burden of AKI on NHS services in England alone is believed to be in excess of £1bn per year, which is greater than the costs attributable to breast cancer. In 2009, the NHS conducted an enquiry into AKI. This found that care in patients with AKI could be described as “good” less than half the time. In particular, the report identified significant delays in recognition of the disorder, poor management of complications, and deficiencies in access to specialty care.

In 2013, the National Institute of Health and Care Excellence (NICE) published guidance on the care of patients with AKI, emphasising the importance of prompt detection and the coordination of care. The guideline’s “Research Recommendations” also suggested that it would be of national importance to establish whether early diagnosis and targeted intervention in AKI improved outcomes care. This in turn led to the National Patient Safety Alert issued by NHS England.

How Streams works to detect AKI and alert clinicians