As the NHS Abdominal Aortic Aneurysm (AAA) programme marks the screening of its one millionth 65-year-old man, a Royal Free Hospital (RFH) patient who missed two screening appointments has told how the decision to attend his third probably saved his life. 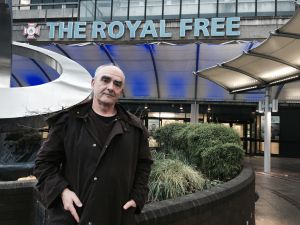 An abdominal aortic aneurysm is caused when the main blood vessel in the body weakens and expands. Most AAAs have no symptoms but, if left untreated, aneurysms can grow and rupture, which can be fatal. Just eight out of every ten people with a ruptured AAA die before they reach hospital or fail to survive emergency surgery.

AAA screening is offered to all men registered with a GP during the year they turn 65.

However, after he was contacted by the RFH screening programme Maurice McElroy failed to attend two appointments before finally deciding to attend his third.

“The first time I saw the letter asking me to make a screening appointment I thought ‘what the hell is an AAA?’” said Maurice, who splits his time between painting and decorating, and playing drums in a blues band.

“I couldn’t get to the first appointment, or the second. They organised a third for November 2014 and when it came up I almost didn’t go, because I thought ‘I’m healthy, I’m fine, I don’t need this’. But I thought since they had gone to the trouble of organising all my appointments I should make the effort to turn up.

“After the screening I was half way towards the door when the clinician said we had to talk about the scan. They said I had an aneurysm and it was big enough that something needed to be done about it.”

Maurice, who lives in West Hampstead, was sent for a stress echo test ahead of his surgery, but doctors noticed a problem in his heart and sent him for an angiogram. It was then he discovered he was suffering from coronary heart disease and required a triple heart bypass before any treatment for his aneurysm could begin.

He said: “My first thought was that they had got it wrong. I didn’t get ill, the last time I was in hospital was when I was 12, and I had no symptoms. The aneurysm itself was asymptomatic.”

After recovering from successful heart surgery Maurice returned to the RFH in May 2015 where he was given an endovascular stent graft. He is recovering well and has even started doing shows again. 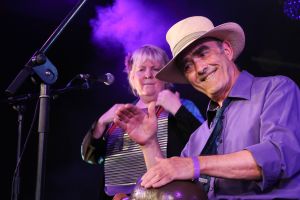 He said: “Blokes are all the same. We think we are immortal and none of us like going to doctors. But the screening takes 10 minutes it doesn’t take much time out of your day, it’s not invasive and it could save your life.”

Since the national programme began in 2009, well over 10,000 aneurysms have been detected that need monitoring or treatment and more than 2,000 men with large aneurysms, measuring 5.5cm or wider, have been referred for successful surgical repairs.

The screening test is a simple ultrasound scan that looks for a weakness and enlargement of the aorta, the main blood vessel in the body. The results are available straight away.

Men over 65 who have not been screened can self-refer by contacting their local screening programme directly.

Meryl Davis, consultant vascular surgeon and AAA screening coordinator at the Royal Free London NHS Foundation Trust, said: “Cases like Maurice show just how important the NHS AAA screening programme is, and it is fantastic news that so many 65-year-old men have now been screened.

“Given the low survival rate following a ruptured aneurysm it is so important for all 65-year-old men to attend their screening appointments, and for any older men who have not yet been screened to get in touch with their local screening programme.”

Dr Anne Mackie, director of screening at Public Health England said: “It’s great news that one million 65-year-old men have now been screened for AAA. The death rate after a rupture is about 80%, as many patients die before they reach hospital. The programme has been a major public health success story and has proved to be crucial in detecting and treating large aneurysms, leading to the prevention of premature deaths in men aged 65 years and over.

“Screening has its harms as well as benefits and it is important that all eligible men make an informed choice when deciding whether or not to be screened for AAA.”

Find out more about the NHS AAA screening programme.

Image 2: Maurice with his band. Picture by Wendy Auld