A senior matron at the Royal Free Hospital who donated his kidney to a friend has said it was “the most rewarding experience.” 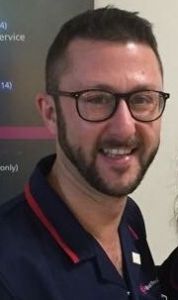 Craig Binch donated his kidney to his mum’s friend Joy whose own kidneys had started to fail. His right kidney was removed at Guy’s Hospital in October before being taken by ambulance to Nottingham, when it was implanted in Joy.

Craig spent just a few days in hospital following the operation before going home to recuperate for a few weeks. Joy also had a speedy recovery, although she wasn’t allowed to see Craig for two weeks while she remained on stronger immune suppressing drugs, to ensure that her body did not reject the new organ.

“After two weeks she looked wonderful,” said Craig. “She had more energy and was feeling so much better. She is now feeling great.

“It was the most rewarding thing. My family was really proud and happy I had done it and they made a fuss of me. Although now it has all gone back to normal!”

Craig was reviewed 6 weeks after surgery but everything went well with his recovery so now he doesn’t need to see them for another year.

“The staff at Guys were brilliant, the nurses were with me the whole night,” added Craig. “My recovery involved a small walk every day and after a month I went back to work. It was a phased return, so for the first few weeks I had fewer hours than normal and then I was back up to full time and everything was completely back to normal. The Royal Free has been very supportive.  The only thing I need to be careful is that I don’t go overboard with drinking and I have to remember to stay hydrated so that my remaining kidney is ok. But I was on holiday recently and I had a few drinks and enjoyed myself. It was all fine – all I have as a reminder is a small scar.”