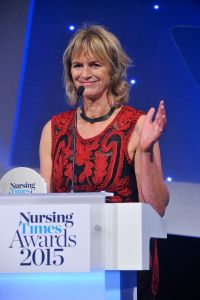 The infectious diseases team were given a special recognition award after caring for three Ebola patients at the hospital’s high level isolation unit (HLIU), including Pauline Cafferkey who was discharged for a second time from the Royal Free Hospital this week. They were given a standing ovation by the audience as their award was announced.

Accepting the award, Breda Athan, senior matron at the HLIU, praised her colleagues and said: “As a lead nurse I’m extremely proud that all the members of the team worked above and beyond the call of duty to achieve a positive outcome.

“While we are delighted to receive this award, none of us working on the HLIU at the Royal Free Hospital are in any doubt that what we did was anything compared to our nursing colleagues who worked in West Africa.”

In addition, Kay Greveson, clinical nurse specialist for inflammatory bowel disease (IBD), won the award for continence promotion and care after she set up a travel-advice website for patients with IBD. 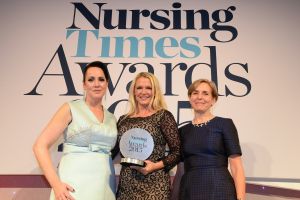 She established the IBD passport website last year so that patients and clinicians have a one-stop shop they can refer to for travel advice. Her website has gained international interest and there are now 700 people with IBD from across the world registered.

Kay said:  “I feel so proud and honoured to have won such a prestigious nursing award. To be recognised for the hard work then to develop the IBD Passport website is just amazing. I hope this helps to raise more awareness of inflammatory bowel disease and the issues suffers of this chronic confirmation face on a daily basis."

She spent two years collecting the information and building the website. She was given a nurse innovation award of £1,500 from Shire Pharmaceuticals to set up the website, but met the remainder of the cost herself.