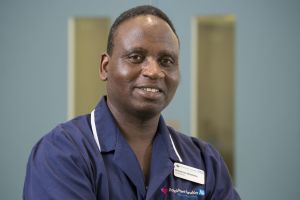 Ndumiso Ndebele, charge nurse on 5 East B ward at the Royal Free Hospital, was working as a pharmacy technician in Zimbabwe when he decided that he was committed to pursuing a career in nursing.

“I wanted to be doing something where I was making a difference to people’s lives,” he said. “Of course I was doing that as a pharmacy technician, but I wanted to be there by patients’ bedsides.”

Ndumiso says that he saw the nurses coming in to where he worked and knew then that he wanted to be doing the same job.

Unfortunately it was a struggle to enrol on nurse training in Zimbabwe so he applied for courses in the UK and was accepted onto a course at Middlesex University. He moved to England to start his training in 1999.

Although his placements were at other hospitals, Ndumiso kept hearing from some of his friends that the Royal Free Hospital was a great place to work, and soon started working shifts as a healthcare assistant at the hospital on top of his regular study and work placements. He found the sister on the ward he was working on inspiring, which increased his desire to work at the trust.

After completing his training Ndumiso was offered a job at a hospital where he had undertaken a placement, but was also offered an interview at the Royal Free Hospital as he had impressed colleagues with the work he was doing as a healthcare assistant. He was successful at the interview and has been at the hospital as a nurse ever since.

Ndumiso has enjoyed a varied career at the trust, starting in gastroenterology before subsequently spending time working in A&E. In 2005 he moved onto a renal ward and undertook further training to specialise in renal care, including placements in transplant and dialysis. In 2014 he was given the opportunity to contribute to the setting up of a brand new urology ward, taking on the role of charge nurse.

As a charge nurse Ndumiso now manages the day to day organisation of the ward, a job which ranges from overseeing staff rotas and recruitment to ensuring that stock levels are maintained, as well as overseeing patient care. Despite the demands of a management role he still finds time to spend with patients.

“The thing I value is teamwork and valuing others,” he says. Ndumiso often calls staff into his office just to see how things are going and discuss their concerns. In a career where there can be difficulties in recruiting staff, he sees supporting colleagues along their nursing journey as key to retaining staff on the ward.

Ndumiso believes people don’t realise how rewarding nursing can be.

“You see people come to you sick, and then walking out and thanking you,” he says, explaining that this can be immensely satisfying.

“The sense of belonging to a team is one of the best things about nursing as a profession. You are doing shifts and physically working with other people, it’s not like being stuck behind a desk at a 9-5 job.

“I am proud to be a nurse. I love my job, and it’s not about me or about money – it’s about making a difference.”