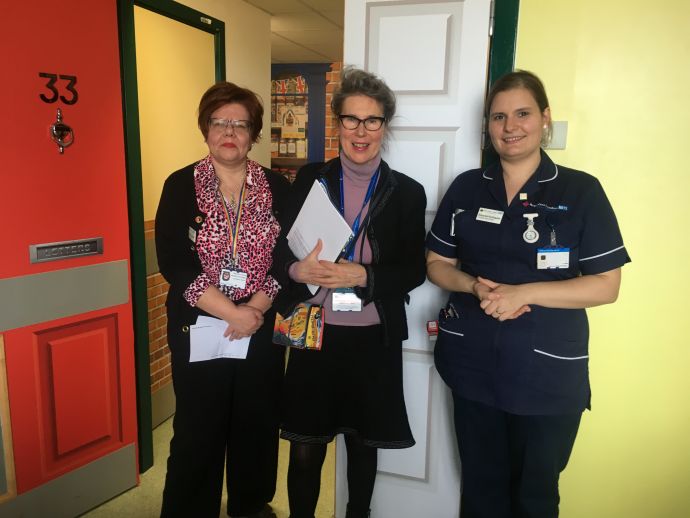 The president of the Royal College of Nursing visited the Royal Free Hospital (RFH) yesterday, where she learned about the innovative ways the trust is delivering care to dementia patients.

Professor Anne Marie Rafferty was taken on a tour of the hospital where she spoke to nurses working on dementia-friendly wards and found out how a new theatre space is helping patients.

Eduarda Rodrigues, ward manager for 10 north, told Professor Rafferty that having a space which does not feel clinical aids recovery.

She said: “It’s great that patients have somewhere to go that is away from the ward, it doesn’t feel clinical and it makes them feel more comfortable, so that helps them recover more quickly.”

Eduarda, who is originally from Portugal, also spoke to Professor Rafferty about the differences in nursing care between Portugal and the UK.

The RFH director of nursing Rebecca Longmate, who led the tour, took Professor Rafferty to the trust’s high level isolation unit and the intensive care unit.

Professor Rafferty said: “This is an amazing organisation with a treasure trove of talent. It’s inspiring to see the work that people are doing here, the creativity that is being mobilised by staff to overcome challenges. It’s great to see that staff here are always looking at care from the point of view of the patient.”

Rebecca Longmate added: “It was an absolute pleasure to show Professor Rafferty around the RFH. We’re so pleased to be able to tell her about some of the pioneering ways in which we care for elderly patients. We also spoke about some of the challenges facing nursing, such as recruitment, and how we are overcoming them. I know our nursing staff were thrilled she was able to visit and I hope Professor Rafferty also found it useful.”