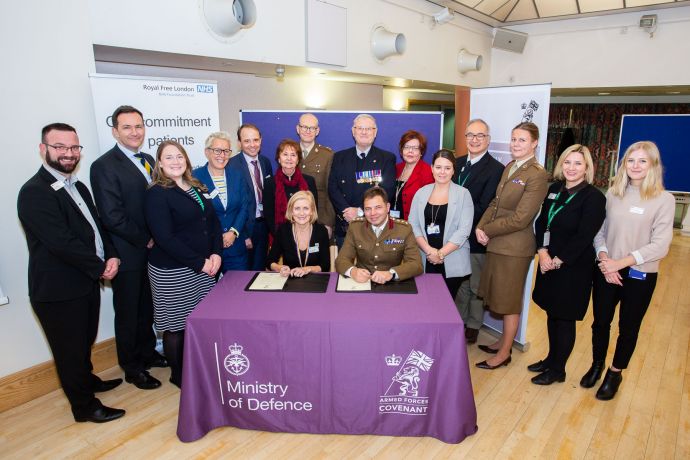 The Royal Free London (RFL) has signed up to the Armed Forces Covenant – a pledge to support members of the armed forces community.

The signing of the covenant took place at a special event attended by RFL reservists, as well as patients and staff who are veterans.

It coincides with the trust being given a silver award in the Ministry of Defence’s employer recognition scheme for the work that is done to support reservists and veterans working at the RFL.

Kate Slemeck, the chief executive of the Royal Free Hospital, signed the covenant on behalf of the trust.

The covenant is a pledge that those who serve or have served in the armed forces and their families should be treated with fairness and respect in the communities where they live.

More than 4,000 organisations across the UK have signed the Armed Forces Covenant, including local authorities, other NHS trusts, charities and businesses.

Kate said: “I’m really proud to sign this covenant on behalf of the trust. During this month of remembrance, it feels right to be thinking about what more we can do to support members of the armed forces community.

“Signing this covenant means that we will ensure no member of the armed forces community faces disadvantage in the provision of healthcare compared to other citizens and that we will support those staff who are members of the reserve forces or who are veterans – staff who bring so many skills and so much expertise to this organisation.”

Dr David Patch, a consultant hepatologist at the RFL, became a member of the reservists in 2005.

He said: "Being a reservist means that I have something else in my life which takes me away from medicine - all clinicians need a break at times. It’s allowed me to develop a range of skills such as followship - the willingness to follow orders.”

Former member of the Welsh Guards Robert Idwal Bellis, spoke about the care he received at the RFH when he had a liver transplant in 2007.

“When I had my transplant I was working as a Beefeater at the Tower of London, which meant that I lived in the tower. I got the call that a liver was available for me in the middle of the night – I needed special permission to leave the tower as they lock it all up after dark.

“I can’t thank the staff here enough for the care – everybody from the cleaners to the surgeons, it’s thanks to them and their dedication that I am here today. And it has meant that I was able to pick up the Royal Victoria Medal from the Queen at Buckingham Palace – I was awarded that for 23 years of service. That was one of the proudest days of my life.”

Image: The Armed Forces Covenant being signed by chief executive of the Royal Free Hospital Kate Slemeck along with Colonel Ashleigh Boreham.