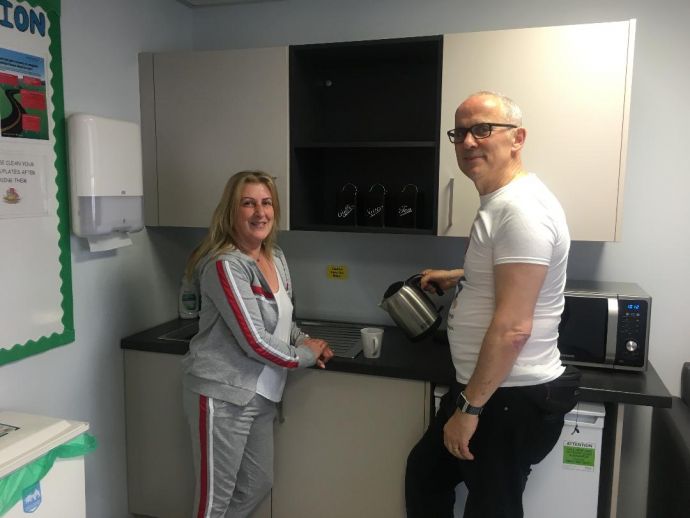 The parents’ room on the children’s ward at Barnet Hospital has been given a £7,500 make-over thanks to a donation from a local charity.

The Joely Bear Appeal was founded 25 years ago by Lisa and Leigh Renak and their family after their four-year-old son Joel died of a rare liver cancer. Joel was cared for on Galaxy Ward at Barnet Hospital, as well as at Great Ormond Street and Kings College Hospital.

The parents’ room is a space for parents to relax and make tea or coffee while their children are being cared for on Galaxy Ward.

The money donated by the appeal has paid for new flooring, new kitchen fittings, new furniture, including a sofa, and for the room to be painted. New electrical equipment, including a TV, fridge and microwave has also been provided with the money.

The funding comes two years after the Joely Bear Appeal paid for a teen oncology room, where teenagers and children can relax after receiving chemotherapy.

Leigh said: “It was a mutual idea to fund the renovations to this room – having provided a space for the kids, we wanted to do something for the parents. We left the decisions over the decorations to the team here and I think it looks great. It’s big change from when I was a parent on the old children’s ward at the hospital 25 years ago. There weren’t any parent rooms then.

“I think it is really valuable – that there is somewhere relaxing parents can go while their children are on the ward.”

Georgia Demetriou is one of the parents using the room – her 14-year-old daughter Alexia is being cared for on Galaxy Ward.

She said: “It’s lovely and welcoming. We can come here and make a cup of tea. It’s also somewhere to go to have a half-hour away from the ward. When you are on the ward, you don’t want to disturb the children sleeping so it’s difficult to talk, but now you can come in here and have a chat – you can also speak to other parents which is really helpful.”