The Royal Free Charity held its first annual volunteer party for the Barnet Hospital and Chase Farm Hospital volunteers last week. The restaurant was transformed with flowers, balloons and other decorations as the volunteers celebrated with live music, a prosecco reception and a two course meal. 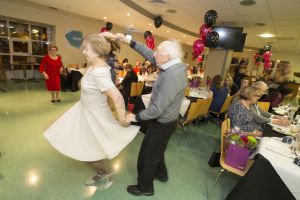 Flowers, badges and certificates were also awarded to volunteers who had fulfilled between five and 45 years of service.

Fiona Jackson, Chase Farm Hospital director, said: “It really was such a privilege to meet and talk to so many volunteers who have devoted so much of their time to improving the patient experience at Chase Farm Hospital. Many of their stories were really inspirational. I do hope that the word really does start to spread across the community that we would like volunteers of all ages to become part of the team at Chase Farm.”

Elaine Donnellon, voluntary service manager, added: “The evening was amazing with many of our volunteers coming along and being formally recognised for the wonderful work they do in supporting our patients and trust. We‘ve had wonderful feedback from staff and volunteers and look forward to next year’s party already.”