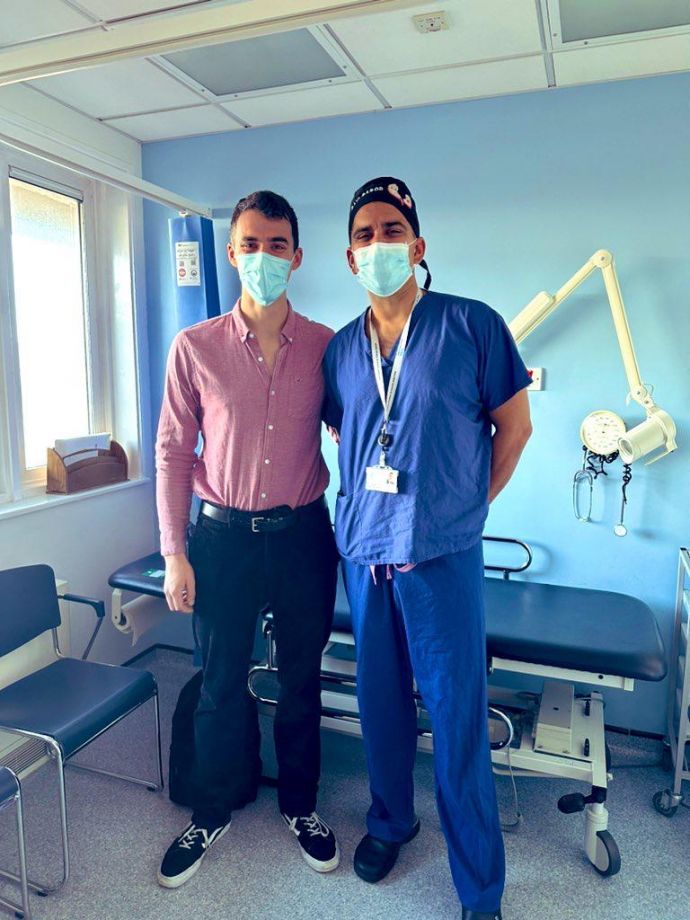 A 25-year-old man has become the first patient in London to be discharged home just hours after undergoing surgery to remove a kidney.

Luke Tolchard is now well on the way to recovery following his major surgery performed as a day case at the Royal Free Hospital for the first time at the end of November.

The software product manager from Kentish Town says he was really happy to be back in his own bed just a short time after his operation.

“I am feeling surprisingly well,” said Luke. “I’m able to move around and I went on a Tomb Raider experience for my work Christmas party so I’m nearly back to normal.”

Luke said he started to feel unwell about a year ago, noticing a pain in his back which gradually got worse.

“I noticed that it was whenever I had been drinking alcohol,” he said. “A few drinks and it would be agony – and the pain would last for a few days.”

After being referred to the Royal Free Hospital, scans revealed that Luke’s left kidney was doing all the work, while the right one wasn’t functioning at all.

“The scan revealed there was an obstruction in the kidney, which restricted the flow,” said Luke. “When I drank alcohol, the fluid would get stuck and that’s why it was painful.”

It was then that consultant surgeon Ravi Barod offered Luke the chance to be the first patient at the hospital to undergo surgery to remove a kidney, with the help of a surgical robot, as a day case patient.

“Only certain patients would be suitable for this,” said Ravi. “They would have to be relatively fit and – one of the key factors - is whether the patient feels confident. There would have to be no complications from the surgery and their pain would need to be well controlled.

“The patient also needs open access to emergency care – we have a special clinic here at the hospital that they can come to immediately if they need to.”

He said: “After the operation I was quite happy to leave and my journey home is only 15 minutes.

“The biggest challenge just after an operation is getting in and out of bed so I made a makeshift hospital bed with pillows to make it easier.

“You also have a doctor at the end of a phone line and you have a follow up the next day, so you feel like you are being looked after.”

Thanks to improvements in care, over the past seven years the length of time patients stay in hospital following the removal of a kidney has fallen dramatically.

Ravi said: “In 2015 patients would generally stay in hospital for about five days. In 2016 we got this down to two days for fit patients. Now we are doing it as a day case.

“For patients who are suitable, it really benefits them and benefits the hospital as well. Patients are more likely to recover sooner from their surgery if they are at home and it means we can free up beds in hospital for other people. So we are hoping to do more of these as a day case next year.”