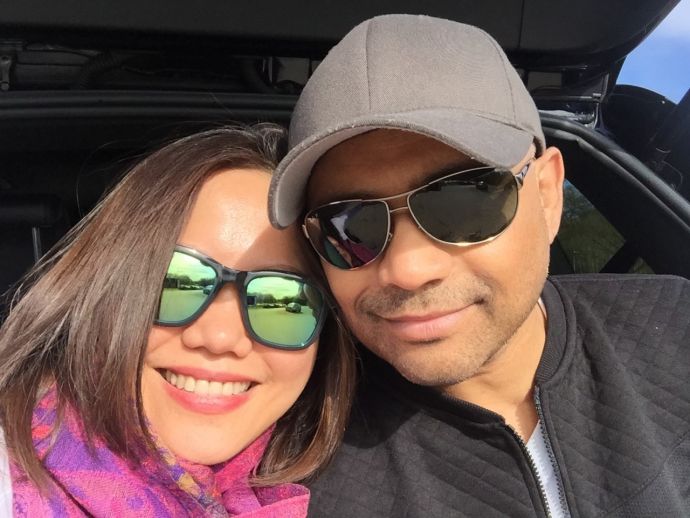 A patient who spent 30 years on dialysis says it was his wife’s love which finally persuaded him to have a kidney transplant.

Since the age of 19, Senthil Kumarathevan - who is now 49 - has undergone dialysis for four hours three times a week. Now at long last he can say goodbye to the sessions and enjoy a new lease of life after receiving a new kidney thanks to the transplant team at the Royal Free Hospital.

Senthil was born with a defect which meant urine flowed back to his kidneys causing recurrent infections. Although he had an operation when he was five years old, his doctors warned his parents that the initial damage meant he would need dialysis later in life – and for many years he didn’t feel the need for a transplant.

He said: “I played a lot of football and cricket and felt very well. I’m vegetarian and don’t drink or smoke. I did start struggling with mobility and was having difficulty working but was initiated into a yoga practice by a Kriya yoga master. Within three months of practising meditation I had reversed the problems. This was a major factor in me deciding not to go for a transplant, as I began detaching to some extent from my body and mind and my personal belief was about facing my own karma. During the dialysis sessions I just carried on working on a laptop. I was on the list for a transplant a couple of times but never went through with it.”

It was his wife, Marichel Aguila, who finally convinced him having a transplant was the right choice for him. Marichel is a dialysis nurse who also works with transplant patients. The couple married three years ago.

Marichel, 48, said: “Of course having a transplant was always Senthil’s decision but I suppose you could say that I just kept bringing it back to the table as an option. Working as a dialysis nurse I knew that being on dialysis long term would eventually lead to health problems like poor circulation.”

Senthil admits that although he had always enjoyed good health he had noticed in recent years a deterioration in the nerves in his legs and feet causing numbness.

He said: “As the saying goes ‘love triumphs belief’! I listened to Marichel and I also listened to my consultant, Professor Andrew Davenport, who had been discussing it with me for many years. Ultimately I did it for the love of my wife. It was a decision I was willing to make, as I was no longer existing for just myself, it was no longer my own journey. I had firsthand experience of her worrying and suffering.

“I want to pay tribute to my surgeon, Fiona McCaig for carrying out what was a complicated surgery, given my history. Plus Ammar Al Midani, the transplant surgeon who looked after me in clinic every week after the surgery and who was always on the end of the phone to answer any concerns

Mr Al Midani said: “Senthil’s case shows that whatever your belief system and however long you have held those beliefs there is still room for listening, discussion and ultimately even a change of heart. Senthil’s story gives me hope we can get more people facing similar dilemmas willing to reconsider their options.”

Senthil and Marichel are now looking forward to spending the festive season together in their new home.  The couple recently moved from Edgware to Borehamwood.

Senthil adds: “Friends helped Marichel move house while I was in hospital having my transplant. I arrived back with a new kidney and to a new home.”