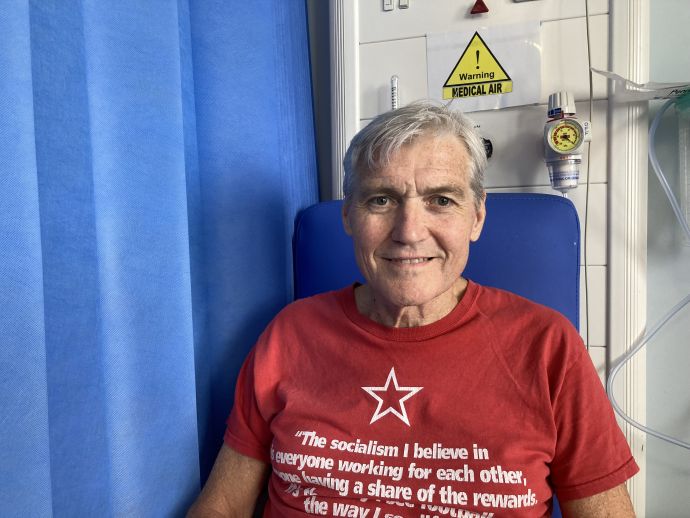 A father-of-three is recovering at home with his family, after undergoing a life-saving liver transplant, thanks to an organ preservation technique, which could ensure many more organs are suitable for donation.

George Hunter, 68, received a new liver last month with the help of the normothermic regional perfusion (NRP) technique carried out by a team at the Royal Free Hospital. The technique helps to improve the function and quality by restoring blood supply to the abdominal organs after the donor has died. The Royal Free London is the first trust in the capital to use this organ preservation technique.

The retired City worker was in urgent need of a transplant because of liver cancer that was not treatable by other methods.

George said: “I couldn’t be happier. I feel like I’ve won a golden ticket with this new lease of life. I’ve got three teenage children and it just feels amazing to be back at home with them and my wife. I’m someone who likes to understand what’s happening and I felt really involved and committed to this transplant and to the new technology. I felt like we were all on the same team.”

NRP is specifically used for donations after circulatory death (also known as DCD).

Satheesh Iype, the consultant surgeon who led the team carrying out the organ retrieval, said: “Previously when potential donors had a circulatory death, which occurs in nearly half of all donors, their organs were often not utilised because the lack of oxygenated blood supply in the process meant their organs could potentially sustain some damage before transplanting. This technique has the added advantage of allowing us to assess the function of the organ so we can decide whether it is suitable for transplantation.”

During NRP the blood vessels of the donor are cannulated and the abdominal compartment is isolated with clamps to stop blood getting elsewhere. Meanwhile the donor’s own blood is re-oxygenated – via an ECMO machine - and pumped around the abdominal organs for approximately two hours.

Mr Iype added: “By doing NRP in these donors, the organs will begin metabolising again which means they will be in a much better condition. Currently only 29% of livers offered from DCD donors are used for transplant and this technique would improve this rate significantly.“

Professor Joerg-Matthias Pollok, consultant surgeon and clinical lead for the Royal Free London’s liver transplant service, carried out George’s transplant. He said: “The beauty of this technology is it makes the transplant safer as it gives us a much better understanding of the quality of the organ. There are hurdles to NRP as the logistics are complex and it requires additional staff, investment and training. As one of the largest liver transplant centres in the country we’ve been able to successfully put a specialist perfusion team in place. At the moment our NRP retrieval is within a two hour travel radius of the Royal Free Hospital but we are hoping that in the future we will be able to retrieve from further afield.”

As well as the liver, the NRP means kidneys and pancreas can also potentially be retrieved for use in other patients.

John Forsythe, of NHS Blood and Transplant, with responsibility for organ donation across the UK, says:

“Organ perfusion is an important developing area of organ donation and transplantation and we are delighted to see the Royal Free London introducing this technique to the capital.

“Transplant success relies on a significant amount of activity taking place in a short space of time. Any new technique, like NRP, which allows organs to be preserved for longer has the potential to revolutionise transplantation and enable us to save even more lives. With the majority of the UK now having an opt out system for organ donation, it is important that we are able to maximise the number of transplants which are able to take place.”

George is now reflecting on his good fortune at receiving a donor liver after many years of ill health. He said: “I am just so pleased to be able to return to family life. Also I love walking everywhere and post-transplant every day I’m doing a little bit more. I’d urge everyone to get outside as there’s always something new to see and I’m just so grateful, thanks to the Royal Free Hospital and my organ donor, that I’m going to be around, hopefully for many more years, to see it.”