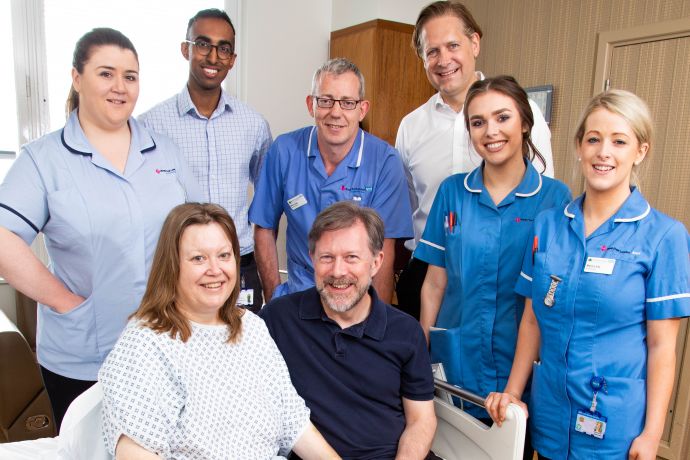 A patient who caught a life-threatening bug had an emergency bedside ‘wedding’ thanks to quick-thinking and compassionate nurses at the Royal Free Hospital.

Dawne Le Good, 51, from Southgate, was in hospital following a heart attack  when she developed an infection similar to the flesh-eating bug necrotising fasciitis.

This serious condition requires urgent, high-risk surgery and she was seen by the surgical team on the cardiac ward who planned to operate that same night.

Because she was still recovering from her heart attack, doctors thought Dawne might not survive the surgery. With the risky surgery imminent, Dawne and her partner Bill Pope, decided they should get married.

Bill said: “At first the doctors didn’t want her to have an operation and they were hoping the antibiotics would work. Because she was still recovering from the heart attack, they thought it would be too much of a strain.

“But the bug wouldn’t go and it became apparent that if she didn’t have surgery, she wouldn’t survive.”

“I was very scared,” said graphic designer Dawne. “They explained that they didn’t know whether I would survive the operation, but I definitely wouldn’t survive without it so we knew we had to go ahead.

“I was also thinking of my daughter Emily who was on a school trip to Berlin. I felt how far away she was and I was devastated that I might not see her again.”

When the Nurses on ward 10 west, where Dawne was being cared for, discovered the couple wanted to marry, they sprang in to action, providing the couple with as many trappings of a wedding as they could get at short notice.  Lauren Mitchell, ward sister, rang round local councils to find out whether the couple could get an out-of-hours emergency marriage licence. Sadly, an official wedding wasn’t possible, so Reverend Claire Carson, head of chaplaincy and spiritual care at the trust, was called in and came to the ward to give them a blessing just before Dawne went in for surgery. The nurses bought the couple a bouquet and some alcohol-free bubbly and they even fashioned Bill a corsage.

Lauren said: “It was late at night so we just had to do the best we could. We popped down to the shop to get some bubbly and some flowers and I was ringing around the local councils to see if we arrange a short-notice wedding. Unfortunately, that couldn’t be arranged so we asked the chaplain Claire to come and perform a ceremony.

Bill added: “Even though we are not religious, it was so nice to have this ceremony. It was so lovely, having gone through what we went through, it was wonderful to have this brightness.

“The nurses are amazing people. All their different strengths, to know that there were these people caring for us. That’s an amazing quality.”

Bill said there was an agonising wait for Dawne to come out of surgery but thankfully it was a success. Following a further operation, Dawne recovered in the intensive care unit, before being transferred to an ordinary ward. She is now recovering at home.

“At every stage we felt that we were so lucky,” said Bill. “When Dawne had her heart attack Emily and I were at home. If she’d had it 15 minutes later she would have been on her own. Because we were there we were able to give her CPR - the paramedics on the phone told us how it should be done.

“The ambulance arrived extremely quickly and they able to take her straight to the Royal Free Hospital so she could have a stent fitted.”

The couple also found out that the bug Dawne developed had nothing to do with her heart attack – and if she had not been in hospital when she got it, she might not have survived.

“I think we have seen every part of the hospital,” Bill added. “There were so many people involved in Dawne’s care, it was incredible. Any everyone has been so kind and caring, we’re so grateful.”

Consultant cardiologist Dr Tim Lockie, was the doctor in charge of Dawne’s care when she first came to the Royal Free Hospital.

He said: “We were worried about how Dawne’s heart would cope with the surgery but then it got to the point when it was critical that the operation went ahead.

“We’re so pleased that Dawne has made a recovery. It’s an amazing story – one thing I would like to emphasise is how important it is for people to learn CPR – it really can save someone’s life.”

Dawne and Bill are now planning a real wedding so they can celebrate with family and friends.