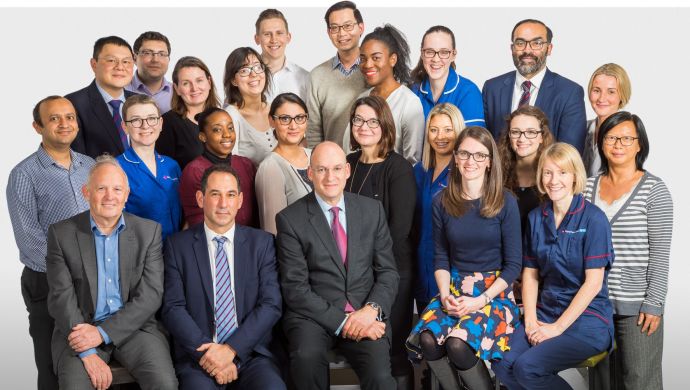 Patients and staff are celebrating the 20th anniversary of the neuroendocrine tumour (NET) unit at the Royal Free Hospital, which is helping tackle a rare condition known as neuroendocrine (carcinoid) tumour, sometimes referred to as the ‘quiet cancer’.

To mark the anniversary, patients have contributed to a series of films discussing their experiences of this rare cancer, as well as the NET unit. In addition 250 patients and their carers, as well as more than 100 physicians, nurses and researchers will be attending a special 20th anniversary event, being held at the Royal College of Physicians later this month.

The Royal Free Hospital NET unit receives approximately 20 new referrals each month, from across the UK and abroad. Since it was established in 1998, the service has grown from 30 to more than 1,800 patients.

NETs are rare and is referred to by some as the ‘quiet cancer’ as it can often take years for patients to be diagnosed. NETs develop from cells of the neuroendocrine system, which are found in organs including the stomach, bowel and lungs. Symptoms can include tummy pain, changes in bowel habits, flushing, shortness of breath, loss of appetite and weight loss.

John Sullivan, 75, from Edgware, London,who took part in filming, said: “I was diagnosed with irritable bowel syndrome (IBS) and treated for IBS for 10 years but in fact I had a NET on the outside of my bowel. I won the lottery when I walked into the Royal Free Hospital because for the first time in years I was speaking to someone who knew what the matter was. You have to ‘own’ your illness. I feedback to the team about the drugs I’m taking because, with respect, I’m the one who knows how it feels and I always attend the patient forums when I can as you learn something every single time.”

Rose Lee, 76, from Broxbourne, Hertfordshire, who was filmed for the anniversary, said: “I’ve been coming to the Royal Free Hospital for 14 years now. I was referred from my local hospital by a doctor who thought there might be hope for me here. I was practically dying – my brother had found me collapsed on the floor. I’d been suffering from chronic diarrhoea. Initially the doctors tried chemotherapy but that didn’t work and nor did radiotherapy.

“I then tried a new ‘nuclear’ treatment (Peptide Receptor Radionuclide Treatment (PRRT) and had three sessions. It worked and I’m grateful. I haven’t got a ha’porth of the trouble I had before and I can even eat normally. Every month I have an injection which comes from the Royal Free which is administered by nurses at my local surgery.”

Carmen Mollison, 78, from Whetstone, Barnet, who was keen to show her support for the unit by taking part, said: “I kept on having diarrhoea and losing weight and was constantly at my GP. I looked like the walking dead. Eventually I asked to be referred to the Royal Free and I was there for two weeks having all kinds of tests. It was a biopsy which showed I had a NET. That’s when the magic of the Royal Free NET unit started. Twelve years on I’m here to be able to talk about the success of my treatment. I had PPRT and for me it’s truly been a ‘wonder-drug’.

Professor Martyn Caplin, consultant in gastroenterology and hepatobiliary medicine and the clinical lead of Royal Free Hospital’s NET unit said: “From starting with 30 patients in 1998 we now have over 1,800 patients under current clinic review. Over the years we have developed a cutting edge programme of medical management and exceptional research. We are a truly multidisciplinary team and every member including administrators, dietitians, doctors and nurses are important to the success of the unit. Our patients have all been an inspiration and we try and learn from every patient’s experience to enhance the outlook for the future.”

In 2011 the Royal Free Hospital was the first NET Centre in the UK to be independently audited and awarded by the European Neuroendocrine Tumor Society the accolade of ‘European Centre of Excellence’.

Dr Christos Toumpanakis, consultant in gastroenterology and neuroendocrine tumours, said: “Our research across Royal Free London and University College London covers all types of NETs including gastrointestinal, pancreatic and bronchial NETs.  The Royal Free Hospital NET unit has been a major contributor to virtually all the pivotal clinical trials over the past 20 years. We attract world class talent and we are internationally recognised.”

Lead NET clinical nurse specialist, Philippa Davies, said: “Our patients tell us they find their nurses invaluable in their care as we are able to help them emotionally as well as medically and are able to reassure, support and answer any questions they may have over the phone between clinics.”

We attract patients from across the country and beyond to our specialist services in liver, kidney transplantation, haemophilia, renal, HIV, infectious diseases, plastic surgery, immunology, vascular surgery, cardiology, amyloidosis and scleroderma. We are a member of the academic health science partnership UCL Partners, which brings people and organisations together to transform the health and wellbeing of the population.

The Royal Free London is one of four trusts across the NHS to be chosen to develop a group model enabling us to share services and resources more effectively across hospitals to improve the experience of patients and staff. More information is available here https://www.royalfree.nhs.uk/the-royal-free-london-group-model/