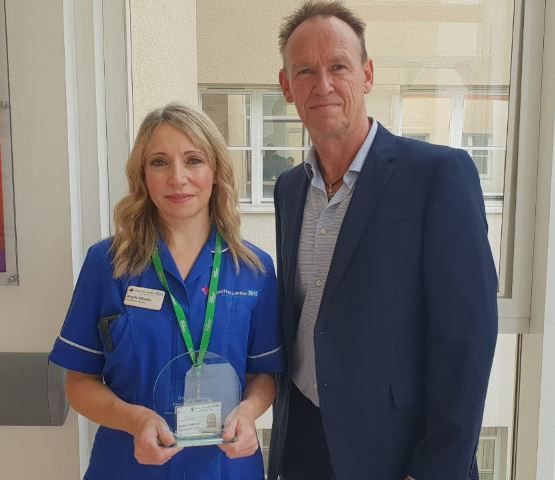 A nurse who has worked at Barnet Hospital for 10 years has won an award after being nominated by her patients for delivering outstanding care.

Angela said her role was all about looking after patients and their families from a bowel cancer diagnosis, right the way through their treatment.

She said: “It’s about being there all the way through the process, it’s a really varied role. I work with the diagnostic team and the oncology team to provide continuity of care. My patients are receiving a significant diagnosis that is devastating news and it’s all about providing holistic care to them.

“Obviously there is a consequence of the treatment in terms of physical health and it’s important to consider a patient’s psychological, social and even financial needs.”

Angela added: “Treating everybody as an individual is key. It’s my job to ease people through the process of getting through the treatment and supporting in whatever way I can. I’m absolutely passionate about my job.”

Angela said the award was incredibly special to her, because patients had taken the time and trouble to nominate her.

“It’s overwhelming and humbling to think people who have so much to cope with have taken the time to do this. It’s such a lovely thing to happen.

“I work with a very good team and couldn’t do my job if I didn’t have such a brilliant group of people around me dedicated to delivering patient-centred care.”