Doctors at the Royal Free Hospital have confirmed that Pauline Cafferkey’s condition has significantly improved. 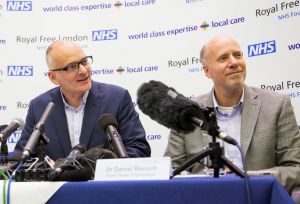 Pauline was first admitted to the high level isolation unit (HLIU) at the Royal Free Hospital in December 2014 after contracting the disease while working in Sierra Leone. She was discharged in January this year after making a recovery.

On 8 October 2015 she was re-admitted to the HLIU after developing late complications from her Ebola infection.

Dr Jacobs said: “I am really pleased that Pauline has made a significant improvement. She is inside the tent, she is still in bed, but she is talking freely within the tent. She has got a long recovery ahead of her and she will be with us for quite a while.”

After careful consideration Pauline decided she would take the experimental drug GS-5734, which is an anti-viral drug.

Dr Jacobs added: “I am hopeful Pauline will make a full recovery – maybe it will be with the help of this anti-viral drug, maybe it will be down to her own immune system. Over time I anticipate that the virus will be eradicated from her completely.”

Watch the video from the press conference below: