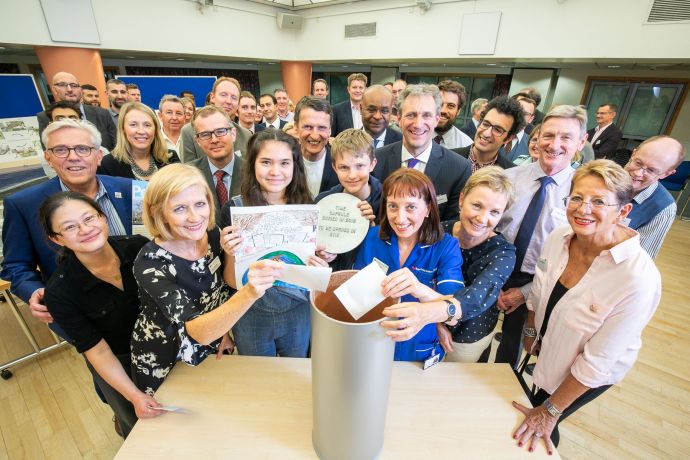 Ten years after the idea was first mooted, the construction of a new home for the UCL Institute of Immunity and Transplantation on the Royal Free Hospital site has reached a milestone which was marked with the installation of a time capsule on 16 October.

The “bottoming out” ceremony marked reaching the lowest point of the site and the beginning of the next phase, when the research building, to be called the Pears Building, will “rise out” of the ground.

Professor Hans Stauss, director of the UCL Institute of Immunity and Transplantation (IIT), currently located in the main hospital building, said the new facility, one of only five clinical research centres of its kind in the world, would provide better treatments for cancer, diabetes, HIV and hepatitis. It would also improve transplantation and the failing immune systems in older people. “This will be achieved by co-locating world class university research with NHS services and the interaction between them that will lead to better treatments for patients.”

A time capsule, designed to be re-opened in 100 years’ time, was embedded in the ground by two 15-year-old students from the Royal Free School, Toby Driskell-Poole and Anabelle Prin, who completed artwork to go in the capsule. It also included copies of two local newspapers and a series of cards answering the question: “What would you like to happen in the next 100 years?

“I’d heard of a “topping out” ceremony, but not a “bottoming out”, said Chris Burghes, chief executive of the Royal Free Charity, which is funding the building. “I got some interesting results when I searched for it on Google. But we thought it was the right thing to do at this stage.”

Sir David Sloman, chief executive of the Royal Free London NHS Trust, said: “We’ve spent 10 years getting here but we’ve never lost sight of what we’re trying to do, which is to make a really lasting impact on individual patients for many years to come.”

Sir Trevor Pears, executive chair of the Pears Foundation, which made a £5m donation to the building of the institute, said before the ceremony: “My brothers and I are proud to support our local NHS hospital.  Our family business is based in Hampstead and over the years we have developed a strong relationship with the Royal Free Charity and had the privilege of meeting many of the fantastic nurses, doctors and other staff who work at the hospital.

“The Royal Free London has a well-earned reputation as one of the UK’s leading teaching hospital trusts and with the exciting partnership with UCL, we are confident this new institute will deliver research breakthroughs and treatments for the benefit of thousands of patients in London and across the UK. We are honoured to have the building named after our family.”