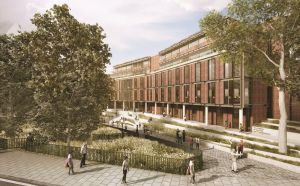 Pears Foundation, a family charity based in Hampstead, has pledged £5 million in its largest ever single donation to support the building of a new world class medical research institute on the grounds of the Royal Free Hospital.

The donation provides a large part of the funding for the new building, which will become home to the UCL Institute of Immunity and Transplantation.

The construction of the new building is being steered by the Royal Free Charity, the Royal Free London NHS Foundation Trust and UCL, who together are raising £42 million for the project.

Designed by Hopkins Architects, the firm responsible for the design and creation of the highly acclaimed London 2012 velodrome, the new building will be named the Pears Building. Construction is due to start in 2015 and is expected to finish in 2017.

A large proportion of the Pears Building will be dedicated to medical research. Leading academics will collaborate to accelerate research into the prevention, diagnosis and treatment of diseases such as cancer, HIV and hepatitis as well as exploring the potential of using stem cells to grow new organs for transplantation. The new facility will place researchers in close proximity with patients who could take part in their clinical trials and it will be the first institute of its kind outside the United States.

Trevor Pears CMG, executive chair of Pears Foundation, said: “My brothers and I are proud to support our local NHS hospital. Our family business is based in Hampstead and over the years we have developed a strong relationship with the Royal Free Charity and had the privilege of meeting many of the fantastic nurses, doctors and other staff who work at the hospital. The Royal Free London has a well-earned reputation as one of the UK’s leading teaching hospitals and with the exciting partnership with UCL we are confident this new institute will deliver research breakthroughs and treatments for the benefit of thousands of patients in London and across the UK. We are honoured to have the building named after our family.”

Chris Burghes, chief executive of the Royal Free Charity, said: “We are hugely grateful to the Pears family for this generous donation. We have been able to take a major step towards achieving our vision to create the hospital of the future, enabling pioneering medical research that transforms the patient experience.  The Pears Building will be on the doorstep of the Royal Free Hospital, bringing award-winning scientists closer to patients, allowing them greater access to clinical trials and the latest medicine.”

David Sloman, the chief executive of the Royal Free London NHS Foundation Trust, said: “We are very grateful to Pears Foundation for this gift. The new facility will bring more of the world’s leading medical researchers to the trust and will mean more of our patients can have access to the latest medical treatments. I am thrilled that the Pears family has made such a generous donation towards this project.”

The Pears Building will be the biggest construction project undertaken at the Royal Free Hospital since it moved to its Hampstead home in 1972.