A physiotherapist from the Royal Free Hospital overcame wild dogs in Romania and a close encounter with a lorry in Poland to complete her once-in-a-lifetime journey along the length of the former Iron Curtain. 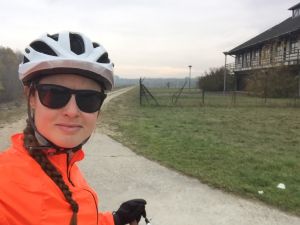 Between August and December 2015 Justine Gosling, 30,  walked and cycled 5,000 miles through 16 countries as she traced the boundary line that divided Europe and the Soviet Union between 1945 and 1991. Justine was the winner of the G.H.Mumm Champagne Cordon Rouge Club’s mentorship competition, which asked entrants to pitch their ideas for unique and exciting adventures.

After starting her journey by trekking through the Finnish wilderness, Justine, from Hampstead, cycled through Germany and Eastern Europe, visiting various historical landmarks, such as Checkpoint Charlie in Berlin and the KGB Museum in Latvia. She also met with several inspirational women, many of whom played a key role in protecting those living on the Eastern side of the border.

Justine said: “I met up with a woman who repeatedly risked her life to get people back from the Russian Gulags. I also met people who climbed over the Berlin wall, and Vera Lengsfeld who co-founded the Pankow Peace Group in East Berlin, which was the first group critical of East Germany’s Communist government.

“It was all quite emotional because they had so much passion for what they were doing and it really came through. It felt like history coming alive.”

However, Justine, who was raising money for the charities Walking with the Wounded and Hope and Homes for Children, almost had her trip cut short after she was involved in a serious collision while travelling through Poland.

“I was about 50 miles outside Warsaw, cycling on a normal road,” she said. “A lorry came from behind and its wing mirror hit me on the back of the head and knocked me off my bike.

“I can still feel the impact and feel myself rolling in the road.

“While lying in the road waiting for the ambulance I was thinking ‘this isn’t the end’. I wanted to finish what I had started, and there was so much that lay ahead that I didn’t want to miss. I was also thinking about the charities, and the hardships the people I was raising money for had suffered. I couldn’t justify not finishing.”

After spending a week in hospital Justine checked into a hotel to rest up, but after a few weeks found she still wasn’t in a condition to ride.

“My back was one big bruise and I couldn’t sit on the bike, but I wanted to keep moving so I just started walking across Poland,” she said. “After a few days I found I could cycle as long as I was standing, and then I was able to cycle sitting down for short distances.”

Even when she was back on the bike full-time there were other hardships for Justine to face. 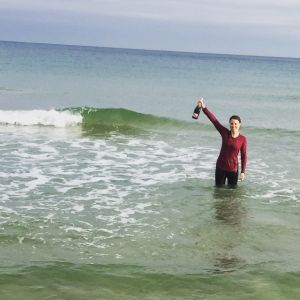 She said:  “When I arrived in Romania there were feral dogs everywhere. One would come out of the long grass and start chasing the bike and after a few minutes I would have up to 20 dogs chasing me.”

She added: “The cycling itself was pretty intense. I was getting up at 6.30am, cycling all day and finishing at 5pm absolutely exhausted. After finding the nearest place to eat I’d spend the next few hours planning the next day’s route, go to bed and start all over again. It was exhausting.

“It would have been impossible if I had been on my own but I was always meeting people on the route and I was getting loads of support on social media.”

Now safely home Justine is already thinking about her next adventure, but says that her journey has given her a new appreciation of life in the UK.

She said:  “It does give you a different perspective. People forget how easy we have it now. We have the amazing NHS, and I know that when I’m in danger I can call the police to protect me. The whole trip made me very grateful for what I have.”

Image 1: Justine at the Hungarian/Slovakian border