A pharmacy porter is getting a deserved break after 48 years working at Barnet Hospital.

Harold Rollins, who retired last week, says that when he started at the hospital in 1968 the wards were all in separate huts and in winter he struggled getting his trolley through the snow. 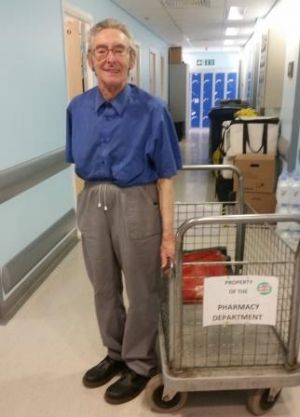 “The job was a bit easier when I first started,” said Harold. “Things are a lot busier now. Everything is now in the same building now; it wasn’t like that when I started. Everything was in separate huts and I had to cope with all sorts of weather as I wheeled the trolley around.”

Harold, from Ridge, near South Mimms, was 20 years old when he first started at Barnet Hospital and until a few years ago used to cycle to work every day.

He added: “I am sad to be leaving but looking forward to retirement and getting on with some gardening. The 48 years has really flown by – it doesn’t seem like that long!”

Harold’s manager Jeanette White said everyone at Barnet Hospital knows Harold and would be sad to see him go.

“He is a lovely person,” said Jeanette. “He has been so dedicated – he always offers to work overtime and he has really given his life to this hospital. We all wish him well in his retirement.”