David Sloman, chief executive of the Royal Free London, has officially opened the Royal Free Hospital’s new £1.8 million linear accelerator, which will give patients with cancer access to the most cutting-edge treatments. 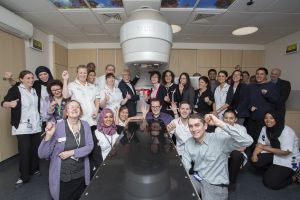 Radiotherapy is a treatment which involves the use of high-energy radiation to shrink or destroy tumours. The new linear accelerator, also known as a linac, targets radiotherapy more effectively for certain tumour sites than the machine it replaced, allowing for better control of tumours.

The new model, which staff have named ‘Sycamore’, can also be used to deliver the latest treatments, so that more patients will be able to take part in ground-breaking clinical trials.

The new machine also has the potential to be much faster, meaning patients spend less time on the treatment couch. The linac is also quieter and has an inbuilt music system to improve patients’ experience.

Installation of the linac began in January 2015 and was completed in September, when it was first used to treat patients.

At the ribbon-cutting ceremony on Monday, Mr Sloman thanked staff for their work in ensuring patients continued to receive world class care during the installation process.

He said: “Purchasing equipment like this linac is what the Royal Free London is all about– investing in leading edge technology to ensure that patients get the best outcomes and experience, and staff have a better working life.”