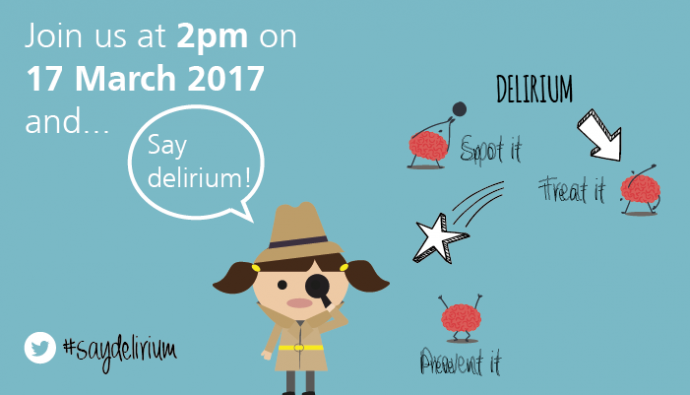 A team of healthcare professionals at the Royal Free Hospital are urging fellow staff, patients and their  family members or carers to ‘Say delirium’ this week (Monday 13 to Friday 17 March), in order to raise awareness of this serious condition.

Delirium is a word used to describe a change in brain function which makes a person become suddenly confused. The person may appear more agitated or emotional and their memory may be worse than usual and their speech may seem muddled. They can often seem frightened or angry and may experience hallucinations or hold paranoid or persecutory beliefs (for example that they are in prison or that somebody is poisoning their food). Alternatively the person may appear more lethargic or withdrawn than usual.

They will be touring the hospital wards holding teaching sessions about this often misunderstood condition and on World Delirium Day, Wednesday 15 March, they will also be staffing a pop-up stand in the main reception of the Royal Free Hospital to raise awareness of the condition with patients and their family members or carers.

They are also holding a web chat on Friday 17 March. This will be hosted by Jo Hardwick, and she will be joined by delirium researcher Dr Dan Davis and Dr Matt Hagger, one of the Royal Free's consultant psychiatrists, and is an opportunity for members of the public to ask the experts questions about delirium. The web chat will start at 2pm at: www.royalfree.nhs.uk/say-delirium.

Dr Jo Hardwick, a consultant in surgical medicine, decided to organise the event because despite so many patients having the condition – it is estimated one in seven patients have it at any one time – it can still be missed if staff aren’t using the right screening tools.

Dr Hardwick said: “People who develop delirium may need to stay longer in hospital or in critical care, have an increased incidence of dementia, have more hospital-acquired complications, such as falls and pressure sores, are more likely to need to be admitted to long-term care if they are in hospital and ultimately be more likely to die. But delirium can be prevented and treated very effectively if dealt with urgently. We want staff to understand the importance of using a proper screening test for the condition and also alert carers to the signs to look out for.”

You can follow the #SayDelirium events by following the RFL twitter account @RoyalFreeNHS, where information videos about delirium will be posted throughout the week for other health professionals and the public.