The family of a six-year-old boy from High Barnet have praised ophthalmologists at Barnet Hospital who caught and treated an eye condition that could have permanently affected his vision.

Sarah Efthymiou became concerned when she noticed her infant son, Adam, appearing to squint in some of their family photos. 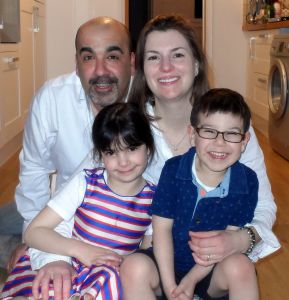 After taking him to her GP, who echoed her concern, she was referred to the ophthalmology department at Barnet Hospital.

Mrs Efthymiou said: “The doctors said it wasn’t anything to worry about as it was just a nasal fold that is giving him the appearance of a squint.

“But when they went to check his eyes they unexpectedly picked up the astigmatism.  They decided to watch it and when he got to about two and half it was decided that the astigmatism was of such severity that he should start to wear glasses.

“I was a bit nervous about how he would react at first, but luckily one of the mum’s in the clinic recommended an optician who was really nice and helped picked out a pair of glasses that he really liked.

“They were very comfortable and just really nice. I think he felt really proud of himself. He realised that when he had his glasses on people gave him compliments.”

Until May this year Adam attended hospital appointments on a bi-monthly basis so that clinicians can track his progress and adjust his prescription where necessary. He has now been discharged and is able to go to his optician for his annual check.

Mrs Efthymiou, a radiographer at Watford General Hospital, said: “The ophthalmology team has been great. They have always explained everything to be me and been really good with Adam. He’s got to know his doctors and really likes them. It's really down to their abilities, kindness and patience that Adam was so settled during our visits.”

Nabil Uddin, lead orthoptist at Barnet Hospital, said: “It is possible to correct an astigmatism using corrective lenses and this treatment is most effective if caught early, as in Adam’s case. If young patients with astigmatism attend regular appointments and make sure to wear their glasses they could grow up to have very good vision with glasses. Unfortunately if you don’t catch and treat it in time, even if you do wear glasses later in life you might not ever have a good level of vision."